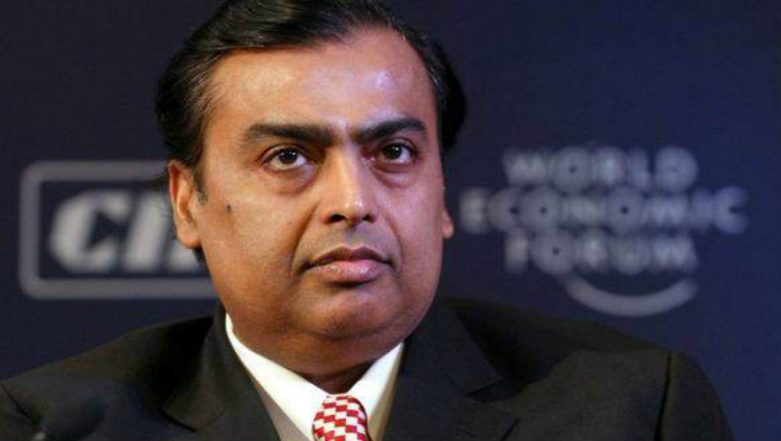 New Delhi, May 21: Reliance Retail's upcoming entry into the online retail sector is the biggest challenge for Amazon and Walmart-Flipkart as the Mukesh Ambani-led behemoth is well positioned to create massive disruption in the market, a new report has stressed. According to the global market research firm Forrester, the online retail sales in India will grow at a five-year CAGR of 25.8 per cent to reach $85 billion by 2023, despite the hiccups of demonetization in 2016, GST in 2017 and the governmental changes in eCommerce policy announced last December.

The time is ripe for Reliance Retail, which operates 10,415 stores in more than 6,600 cities, with 500 million annual footfalls - giving the company the kind of scale required to swiftly launch India-based operations. "One of the things that will trouble Amazon and Flipkart is Reliance's history of launching operations via massive discounts," Satish Meena, senior forecast analyst at Forrester Research, said on Tuesday. Alibaba & Reliance Retail Mega Joint Venture on the Cards; Likely to Make $5 Billion Investment.

Reliance entered the telecom sector in 2003 with the Monsoon Hungama tariff plan, which brought tariffs for voice calls down to just Rs 0.40 a minute from the existing rate of Rs 2 a minute, followed by the launch of Jio 4G plan in 2016 that dropped data rates from Rs 250 per GB to Rs 50 per GB. "This kind of discounting can disrupt any market, and we expect something similar to happen in the grocery space during Relianceaï¿½s launch," Meena added.

Reliance is fast working on creating the world's largest online-to-offline New Commerce Platform, according to Mukesh Ambani, Chairman and Managing Director, Reliance Industries. "Due to the recent changes in eCommerce policy and the restrictions on an inventory-led model for marketplaces with FDI, Reliance Retail is finding a favourable policy environment to launch operations where it can use its existing retail infrastructure to deliver goods to customers," the Forrester report noted.

Reliance launched the food and grocery app among its employees in April 2019 to prepare for the commercial launch later in the year. Reliance Retail is the largest retailer in India, with $18.7 billion in revenue during financial year 2019, and it grew at a CAGR of 55 per cent in the last five years.

Reliance Retail had $81 billion in revenue and $9.4 billion in profit during 2019. "This gives Reliance Retail access to long-term capital from the conglomerate, which has a presence in energy, petrochemicals, telecom, textiles, retail, and natural resources," said Forrester.

Reliance Retail also has a portfolio of over 40 brands, from the midmarket to premium segments and including Hamleys (which the company has acquired for Rs 620 crore) and Marks & Spencer. "These can provide a boost to the fashion and lifestyle segment, which will be the largest category by online spending in the coming years," said the report.

Reliance launched its mobile business at the end of 2015, and by April 2019, it had over 300 million mobile subscribers a" making it the third-largest player in a short span of time. Jio is building on these mobile subscribers by investing in related services to create an ecosystem that gives customers access to rich content and payments options. This ecosystem will be available for Reliance Retail to build on.

To compete with Amazon and Flipkart, Reliance will have to significantly improve the customer experience, both in stores and on its online channel, because discounts and cashbacks will not generate loyalty for online customers a" as we saw in the Paytm Mall case.

"Removal of discounts may lead to a significant loss of buyers from the platform. The positioning of the Reliance platform and its fulfilment will play a critical role in the fight against Amazon and Flipkart," emphasised the Forrester report. The eCommerce competition in India remains fierce.

Amazon has been the most popular online retailer since it surpassed Flipkart in 2016, although Flipkart is still the single-largest online retailer, with 31.9 per cent market share in 2018 (38.4 per cent if you include Myntra and Jabong), closely followed by Amazon at 31 per cent.