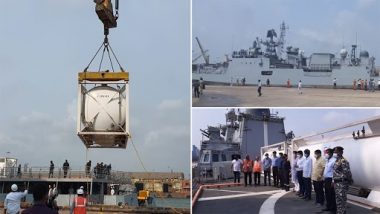 New Delhi, May 5: Indian Naval Ship Talwar, the first ship of Operation Samudra Setu II, entered the port of New Mangalore in Karnataka on Wednesday with 54 tonnes of liquid oxygen from Bahrain.

Vice Admiral M.S. Pawar, Deputy Indian Navy Chief, said as many as nine warships have been diverted to various ports in the region extending from Kuwait in the west to Singapore in the east to bring in the much-needed Oxygen and associated medical supplies. Indian Navy Deploys 7 Ships To Bring Oxygen, Medical Equipment From Various Nations Amid COVID-19 Pandemic

As INS Talwar reached our shores with the 54 tonnes of liquid Oxygen, Indian Naval Ship Airavat has departed from Singapore with more than 3,600 oxygen cylinders and eight 27 ton oxygen tanks and is home bound.

Additionally INS Airavat from Singapore and INS Kolkata from Kuwait are heading back home with Liquid Oxygen, Oxygen filled cylinders, cryogenic tanks and other medical equipment.

"While, three more warships are scheduled to pick up more supplies from Kuwait and Doha, the LPD INS Jalashwa, mission deployed in South East Asia is ready to be diverted to ports in the region as situation demands," Vice Admiral MS Pawar said.

"Just as last year Indian Navy had launched Operation Samudra Setu to repatriate our distressed citizens from IOR countries, let me assure the countrymen that the Navy will continue with its efforts to bring relief and together, we will overcome this challenge," Vice Admiral M.S. Pawar added.

(The above story first appeared on LatestLY on May 05, 2021 04:57 PM IST. For more news and updates on politics, world, sports, entertainment and lifestyle, log on to our website latestly.com).