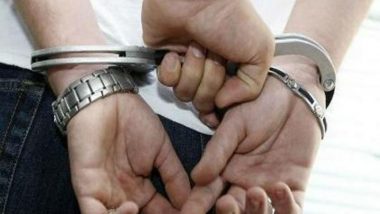 Mumbai, Aug 25: The Maharashtra Anti-Terrorism Squad (ATS) has arrested a suspect from a suburb here as part of the ongoing arrests over a terror plot unearthed after recovering an arms cache from Palghar, official sources said on Saturday. The accused, Avinash Pawar, 30, was arrested from Ghatkopar in north-east Mumbai and will be produced before a court later in the day. This is the fifth major arrest after the Palghar crackdown on August 10 leading to the recovery of bombs, explosives, arms and ammunition that were allegedly intended for terror strikes in Mumbai, Pune, Satara and Solapur.

The ATS has already arrested Hindu right-wing activists Vaibhav Raut, Sharad Kalaskar, Sudhnava Gondhalekar and a former Shiv Sena corporator Shrikant Pangarkar from Palghar and Pune. The squad is unraveling a right-wing terror network across the state and probing their links in other states including Uttar Pradesh and Assam.

(The above story first appeared on LatestLY on Aug 25, 2018 12:49 PM IST. For more news and updates on politics, world, sports, entertainment and lifestyle, log on to our website latestly.com).