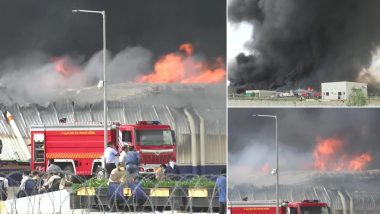 Ahmedabad, June 24: In a major development, a massive fire broke out at a factory in GIDC (Gujarat Industrial Development Corporation) in Sanand area of Gujarat's Ahmedabad. According to initial reports, the blaze erupted in a factory manufacturing disposable hygiene products. Bus Catches Fire on Ahmedabad-Vadodara Expressway, All Passengers Rescued.

According to an update by news agency ANI, twenty-five fire tenders are present at the incident spot. Fire-fighting operations are underway. The cause of the fire is believed to be short-circuit. Till the time this report was published, there were no reports of any injuries or casualties.

In a similar incident from Ahmedabad, a 38-year-old man lost his life after he jumped from the fourth floor of a commercial complex in panic during a fire last month. Around 30 people were rescued from Sakar-7 building in Ashram Road.

"One person panicked and jumped off the fourth floor and injured himself on the head before the fire brigade team arrived at the site. He was rushed to LG Hospital but was declared dead on admission," a fire official had said.

(The above story first appeared on LatestLY on Jun 24, 2020 12:23 PM IST. For more news and updates on politics, world, sports, entertainment and lifestyle, log on to our website latestly.com).