Bhiwandi Shocker: Jobless Man Sets Wife on Fire After She Refuses to Give Him Money to Buy Alcohol 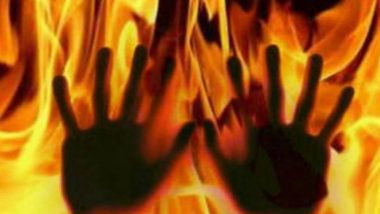 Bhiwandi, September 26: A shocking incident has come to light from the Bhiwandi area in Thane where a man allegedly set his wife on fire after she refused to give him money to buy alcohol. According to a report by Hindustan Times, the incident took place on Thursday night. Shantinagar police in Bhiwandi arrested the accused on Saturday after the family registered a complaint. The accused has been arrested after a case was registered against him at Shantinagar police station in Bhiwandi.

According to details by Police, the incident occurred when the man was in an inebriated state. The accused, identified as 38-year-old Firoj Shaikh, had an altercation with his wife Ruksana Shaikh. The 35-year-old woman had a job while Firoj was jobless for a long time. The report informs that the man used to physically abuse her often. Tamil Nadu: Man Kills Elderly Mother After She Refuses to Give Money for Drinking Alcohol; Arrested.

The HT report states that on Thursday, the man had an argument with his wife over money. The man asked her to give him money to buy alcohol, but she refused. Angered by her behavior, the accused poured kerosene on her and set her afire in a fit of rage. The woman tried to escape. However, after some of the nearby residents noticed her, they tried to save her but by then she was already 90% burnt and later succumbed.

(The above story first appeared on LatestLY on Sep 26, 2021 02:41 PM IST. For more news and updates on politics, world, sports, entertainment and lifestyle, log on to our website latestly.com).