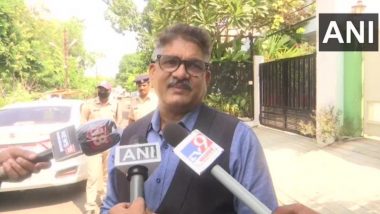 Bhopal, September 28: Director General rank officer Purushottam Sharma has been relieved of his duties after a video of him beating his wife went viral on Tuesday. The shocking incident was caught on camera where he was found physically assaulting his wife. The controversy allegedly erupted after his wife caught him with another woman.

Commenting on the video, Purushottam said, "We've been married for 32 years, in 2008 she had complained against me. But the point is, since 2008 she has been living in my house, enjoying all facilities and travelling abroad on my expenses."

He further said, "If my nature is abusive then she should've complained earlier. This is a family dispute, not a crime. I am neither a violent person nor a criminal. It is unfortunate that I have to go through this. My wife stalks me and has put cameras in the house." Madhya Pradesh: Gandhwani Police Station Incharge Beats Up Wife After After She Catches Him Having an Illicit Affair; Watch Video.

Purushottam Sharma Relieved Of Duties After Video of Him Beating Wife Goes Viral:

Madhya Pradesh: Additional Director General (ADG) Purushottam Sharma has been relieved of his duties after a video of him beating his wife went viral. pic.twitter.com/iSUmLrNqrr

Here's the video of Purushottam assaulting his wife put out by his son:

Action against DG rank officer Purushottam Sharma in Madhya Pradesh. This, after a video of his assaulting his wife was put out by his son, demanding action pic.twitter.com/CH4z2Exdh2

According to ABP reports, it is being alleged that Sharma's son has complained to the DGP and has also sent the video out. The problem reportedly erupted after Sharma's wife caught him red-handed in an objectionable position with another woman.

(The above story first appeared on LatestLY on Sep 28, 2020 01:37 PM IST. For more news and updates on politics, world, sports, entertainment and lifestyle, log on to our website latestly.com).