The promise by RJD's chief ministerial candidate, Tejashwi Yadav to offer 10 lakh jobs to the people of Bihar if it forms government in the state has managed to draw crowds to the party's election rallies ahead of the Assembly polls. 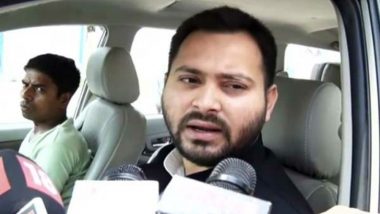 Masaudhi, Oct 22: The promise by RJD's chief ministerial candidate, Tejashwi Yadav to offer 10 lakh jobs to the people of Bihar if it forms government in the state has managed to draw crowds to the party's election rallies ahead of the Assembly polls.

The lucrative offer of the Rashtriya Janata Dal (RJD) and Mahagathbandhan have been so far successful in bringing people out of their homes to listen to Tejashwi at the rally venues. Bihar Assembly Elections 2020: RJD to Provide 10 Lakh Govt Jobs if Voted to Power, Says Tejashwi Yadav.

Tejashwi was in Masaudhi on Wednesday to campaign for an RJD candidate. People had turned out in large number. At one point, the situation seemed to be getting out of control even for police as the people were pushing the barricades and move beyond those makeshift barriers.

Some of the people even broke the barricades after Tejashwi told police personnel to allow them to come to the stage from where he was speaking.

Rahul Sharma, a native of Masaudhi, located around 30 km from Patna, said: "Announcements like 10 lakh jobs in government sector has created huge expectations among common people of Bihar. Hence, people from all section of the society are assembling at rally venues to see him (Tejashwi) and listen to his speech."

Another resident, Ramesh Sagar, said: "There is no doubt about the anti-incumbency factor working against Chief Minister Nitish Kumar as he is unable to take care of some of the key issues like inflation, non-creation of jobs, migration, etc. Poor people have become poorest due to the flawed policies.

"On the other hand, there is a politician like Lalu Prasad known for his socialist ways and advocacy for equality. Hence, they are looking at his son Tejashwi Yadav as option," he added.

"The situation is similar to the 2014 parliamentary election where people of the country looking for the change. Let's hope Tejashwi sticks to his and it does not turn out to be a 'jumla'," Sagar said.

"He had collected votes by opposing BJP but later joined hands with the same party for his vested interests. He had put the mandate aside. People of Bihar are aware of these developments... He (Nitish) is no longer a trustworthy individual for people of Bihar."

"We are looking at Tejaswi Yadav as face of change. The people of marginalised category are looking upto him as ray of hope," said Sri Krishna Sharma, who had come from Punpun, near Masaudhi.

In the Sankalp Patra of Mahagathbandhan, there are 25 points including loan waiver of farmers, non implementation of newly introduced agriculture bill, no fee for competitive examination, no travelling charges for students from district headquarters to examination centres, etc.

(The above story first appeared on LatestLY on Oct 22, 2020 09:02 AM IST. For more news and updates on politics, world, sports, entertainment and lifestyle, log on to our website latestly.com).