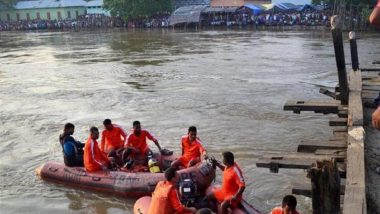 According to a report, thousands of people gathered at the Ekania Diyara ghat. Despite rough weather, 25 people began their journey in the boat towards the Ekania Diyara ghat. The vessel capsized after it was caught in a severe storm. Five persons, including the boatmen, swam to safety and alerted authorities about the accident, after which State Disaster Response Force (SDRF) personnel launched search-and-rescue operations. Bihar: 25-Year-Old Woman Delivers Baby on NDRF Rescue Boat in Flood-Hit East Champaran District.

Eight bodies, including four women and three minors, were recovered from the swollen Gandak river. Bodies of 12 other people remained missing. In Saharsa, 14 people were returning to from Bagulwatol from Chiraiya after collecting wheat and rice from a state-run public distribution shop when their boat capsized near eastern Kosi embankment. While four people managed to swim to safety, 10 drowned.

Four persons are still missing and the bodies of two were recovered on Wednesday. The missing persons are Sanjit Choudhary (22), Rajni Devi (20), Sobha Kumari (12) and a two-month-old baby. Bihar Chief Minister Nitish Kumar consoled families of the victims and directed Khagaria and Saharsa District Magistrates and SPs to deploy experienced divers in the search-and-rescue operations.

(The above story first appeared on LatestLY on Aug 05, 2020 04:21 PM IST. For more news and updates on politics, world, sports, entertainment and lifestyle, log on to our website latestly.com).