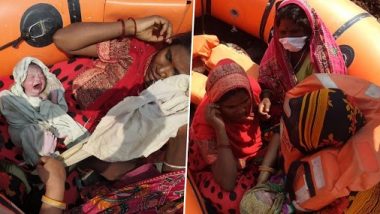 Patna, July 26: A pregnant woman in Bihar gave birth to a child on a rescue boat of National Disaster Response Force (NDRF) on Sunday. The incident was reported from flood-ravaged East Champaran district where the 25-year-old pregnant woman delivered a baby girl on a boat. According to a tweet by ANI, the mother and baby were shifted to nearby primary health centre by ambulance. The condition of both- the mother and the baby, is found to be stable.

Bihar has been reeling under severe flood conditions as several rivers are overflowing especially in east Champaran and Gopalganj districts. Reports inform that as many as 21 National Disaster Response Force (NDRF) teams have been deployed across 12 flood-affected districts in Bihar. So far, 3,500 people have been rescued. During the rescue operation, special care was taken of children, women and senior citizens. Bihar Floods: Nearly One Million Affected, 22 NDRF Teams Deployed For Rescue Work.

Bihar: A 25-year-old woman gave birth to a baby girl on a rescue boat of NDRF (National Disaster Response Force) in flood-hit East Champaran district, today. Mother and baby were shifted to nearby primary health centre by ambulance where their condition is found to be stable. pic.twitter.com/l828fPrJbe

Reports inform that the river embankment, near Bhawanipur village in east Champaran, was breached on July 23-24 night due to the rising flood waters of the Gandak river. As soon as the embankment gave way, Bhawanipur village was inundated, affecting hundreds of people. According to reports, the deluge followed the breach at the Saran embankment of the Gandak river in  Gopalganj district.

(The above story first appeared on LatestLY on Jul 26, 2020 04:52 PM IST. For more news and updates on politics, world, sports, entertainment and lifestyle, log on to our website latestly.com).