Busports To Be Constructed Across India For Public And Private Bus Operators, Airport Model to be Followed

The Central government is planning to build busports with modern facilities on the lines of airports. The government is undertaking a pilot project of building one bus port in each state. 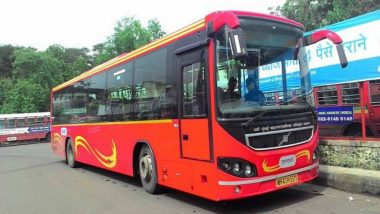 New Delhi, October 1: The Central government is planning to build busports with modern facilities across India. The government is undertaking a pilot project of building one bus port in each state. These busports will have advance facilities just like airports. Later, state governments will construct bus ports in different cities. According to new directives of the government, busport will be based on Engineering, Procurement and Construction (EPC) or Hybrid Annuity Model (HAM).

As per the report published in Dainik Jagran, those states which are willing to construct these busports will have to choose a location for the project and form a nodal agency. Busports will be open to both public and private bus operators. The Central government will then begin pre-feasibility research after which a report will be prepared. In the end, the government will give a contract to a company to construct these bus ports. Janakpur to Ayodhya Bus Service: Yogi Adityanath Welcomes First Bus From Sita’s Birthplace

The bus operator will give busport fee to operate from these busports. The project will have an air-conditioned lounge, luggage checking facility and security. The busports will also have eating joints, toilets and advanced facilities for maintaining cleanliness. According to the report, around 2,000 busports will be constructed in the country. Government-Run Indian Airports To Have Cheaper Snacks With Separate Counters Offering Tea, Food Items at MRP!

Reports also surfaced in July that Sonipat would soon get a busport equipped with modern technology. The busport will be constructed jointly by the Haryana government and the National Highway Authority of India (NHAI).

(The above story first appeared on LatestLY on Oct 01, 2018 09:32 AM IST. For more news and updates on politics, world, sports, entertainment and lifestyle, log on to our website latestly.com).