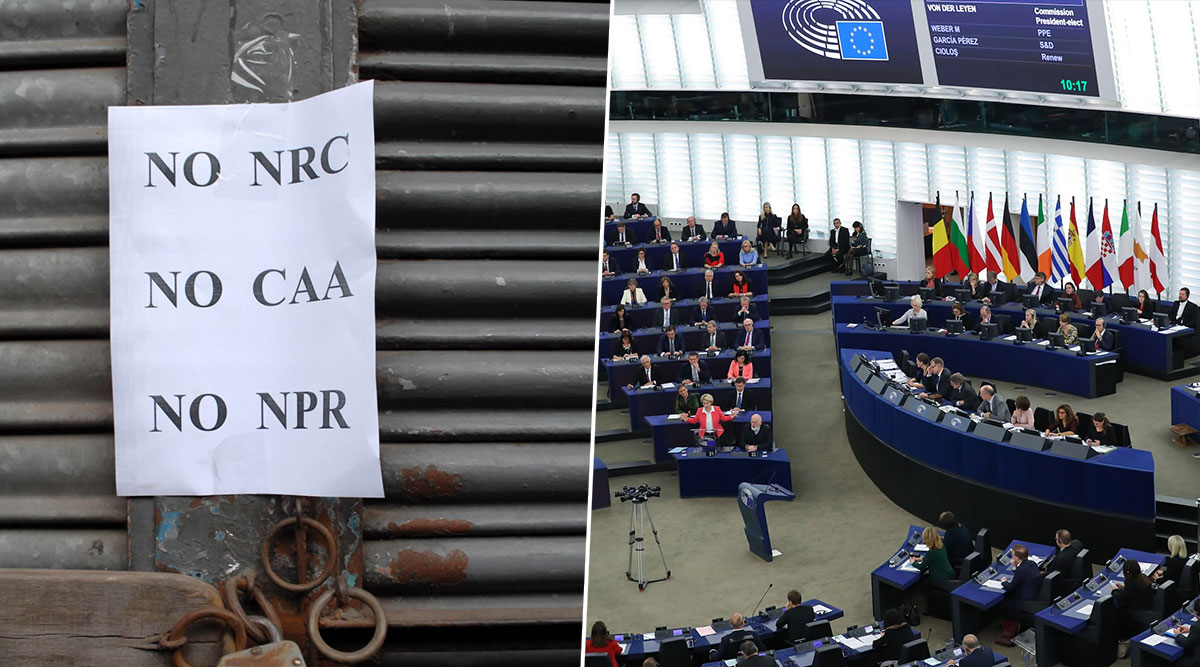 New Delhi, January 29: In a major victory for India, the European Union Parliament on Wednesday postponed voting on resolutions against Citizenship Amendment Act (CAA) till March. As many as 559 members from five groups of the 751-member European Parliament moved resolutions against the CAA, calling it "fundamentally discriminatory in nature" and "dangerous shift" in the citizenship criteria in India. Why Citizenship Amendment Act+NRC Raise Fear And Concerns: A Multi-Dimensional Take.

On Wednesday, the EU Parliament voted against a proposal to put anti-CAA resolutions to vote. The voting has been postponed to the second plenary of March, multiple reports said. Reacting to the development, Indian government sources called it a victory of "India's friends" over "Pakistan's friends". "There will be no voting on the European Union resolution on Citizenship Amendment Act (CAA) tomorrow. Friends of India prevailed over the Friends of Pakistan in the European Parliament today," sources told news agency ANI.

🆕 Tonight: MEPs in #EPlenary to debate the rights of indigenous peoples in the world 🌍 and India's 🇮🇳 Citizenship (Amendment) Act 2019. Full agenda 👉 https://t.co/7jj5EgPQy1

"CAA is a matter internal to India and has been adopted through a due process through democratic means. We expect that our perspectives in this matter will be understood by all objective and fair-minded Members of the European Parliament," they added. Lok Sabha Speaker Om Birla has written to European Parliament President over resolutions against the CAA, saying that passing the same will set an "unhealthy precedent".

"It is inappropriate for one legislature to pass judgement on another, a practice that can be misused by vested interests. I would urge you to consider the proposed Resolution in this light, confident that none of us want to set an unhealthy precedent," Birla stated in his letter addressed to European Parliament President David Maria Sassoli. CAA Protests: 'Those Born Before 1987 or Whose Parents Are Born Before 1987 Are Indians', Says Government.

The motion on the CAA combines the separate resolutions tabled by the Group of the Progressive Alliance of Socialists and Democrats in the European Parliament (S&D), Group of the European People's Party (Christian Democrats) (PPE), Group of the Greens/European Free Alliance (Verts/ALE), Renew Europe Group (Renew) and European United Left/Nordic Green Left (GUE/NGL) Group, representing around 560 of a total 751 MEPs.

A sixth group, the European Conservatives and Reformists Group (ECR), had withdrawn its resolution and references to the revocation of Article 370 in Jammu and Kashmir in some of the resolutions were not included in the final motion.