The Chennai Police arrested C S Karnan, former judge of Madras and Calcutta High Courts, on Wednesday. Karnan has been arrested for abusing judges and issuing rape threats to their wives on online videos, after the Bar Council of Tamil Nadu filed a plea with Madras High Court against him. 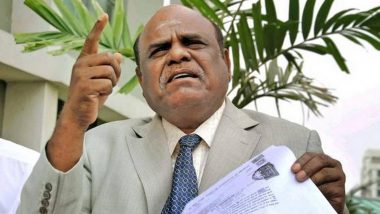 Chennai, December 2: The Chennai Police arrested C S Karnan, former judge of Madras and Calcutta High Courts, on Wednesday. Karnan has been arrested for abusing judges and issuing rape threats to their wives on online videos. A pleas was filed by the Bar Council of Tamil Nadu against the retired High Court Judge for passing rape threats and sexually inappropriate remarks against wives of judges, women lawyers and female court staff. The Council had sought registration of FIR, initiation of appropriate proceedings against such "unfortunate utterances"by Karnan.

On Tuesday, the Mdaras High Court had ordered the Director General of Police and Chennai Police Commissioner to personally appear before it on December 7 to apprise the bench of the progress of the probe against him. Court had earlier asked the Commissioner of Police, Chennai to handle the investigation of the case against Karnan and directed the DGP to supervise the same.  Vijay Sethupathi's Daughter Gets Rape Threats from a Twitter User, Chennai Police Register Case Against Him.

Police informed the Court that two rounds of interrogation have been conducted with the accused. The Bar Council informed the Court that the former Judge had admitted to the commission of the alleged offence during the course of interrogation, however the police has further failed to arrest him. The Council alleged that a second notice for appearance under Section 41-A CrPC was issued to the former Judge, whereas otherwise this provision is only "selectively resorted to". India News | Three of a Family 'shot Dead' in Chennai: Police.

Members of the Bar Council had earlier alleged that the investigation so far carried out by the Investigating Officer was not adequate and requested to constitute a SIT to oversee the proceedings. Following this, the bench called for the personal presence of the Commissioner and DGP on December 7.

(The above story first appeared on LatestLY on Dec 02, 2020 04:23 PM IST. For more news and updates on politics, world, sports, entertainment and lifestyle, log on to our website latestly.com).