An image of a poster from a private hospital in Bengaluru announcing that it was open to administer COVID-19 vaccine COVAXIN to children in the age group of two to 18 years went viral. 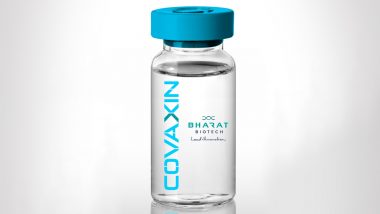 Bengaluru, October 14: An image of a poster from a private hospital in Bengaluru announcing that it was open to administer COVID-19 vaccine COVAXIN to children in the age group of two to 18 years went viral on social media on Wednesday. The poster was designed by marketing team of Sparsh Hospital. After the picture went viral, Sparsh Hospital issued an apology and said it was part of a publicity material and got leaked "inadvertently". WHO’s Emergency Use Authorisation for Bharat Biotech's Covaxin Further Delayed, Say Sources.

COVAXIN has not been approved yet for minors. But Sparsh Hospital's poster read: "The wait is over. Covid vaccine drive for children at Sparsh hospital. Open now for ages 2-18 years." As per the poster, which also has the contact number of the hospital to fix appointments, each dose would cost Rs 1,200. The hospital was widely criticised after the poster went viral on social media. Planning To Travel Abroad? Here's a List of Countries That Allow Entry to Fully Vaccinated Indians.

Later, Dr Sharan S Patil, Chairman of Sparsh Hospital, clarified that no inoculation drive for children was being conducted by them. "The marketing team was working on a creative and it was circulated within the team for approval. This was leaked. It slipped out from within the team and, while everybody was blaming each other, it went viral. There is no date or anything on it. It was meant to be released as and when the government approves the vaccine," he was quoted by Times of India as saying.

Dr Patil also said that his hospital reached out to COVAXIN manufacturer Bharat Biotech and apologised, explaining that it was inadvertent. The Subject Experts Committee (SEC) has recommended COVAXIN for the 2-18 years age group. However, final approval from the Drugs Controller General of India is awaited. Notably, the World Health Organisation has not granted the emergency use authorisation to COVAXIN yet.

(The above story first appeared on LatestLY on Oct 14, 2021 03:34 PM IST. For more news and updates on politics, world, sports, entertainment and lifestyle, log on to our website latestly.com).