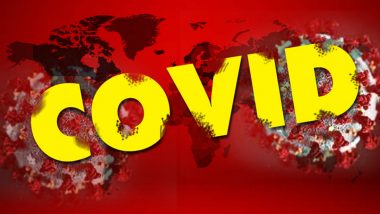 Hyderabad, June 29: A heart-wrenching video of a person infected with coronavirus during his last moments at a hospital in Hyderabad, has gone viral on social media. The patient, named Ravi Kumar, shot the video himself highlighting the plight of patients in government hospitals. In his video, Kumar claimed that he was denied a ventilator in desperate moments and said that he was feeling breathless after the hospital staff at the Chest Hospital had allegedly removed the ventilator support. According to media reports, the patient was admitted at Chest Hospital over suspicion of COVID-19 on June 24 and had done a COVID-19 test on the same day. The result was out only on June 27 a day after his death. BJP President JP Nadda Says '60,000 Ventilators Will Be Available Through PM-CARES Fund by June End'.

The victim's father said his son died minutes after sending the video to him. His last rites were performed on Saturday. In the viral video, the 35-year-old victim alleges that the medical staff at the Government Chest Hospital forcibly removed the ventilator. He added saying that he asked them for the ventilator several times as he could not breathe properly but the hospital staff said he had enough of it, which proved to be the real cause of his death. Meanwhile, the Chest Hospital officials claimed that the death was due to dysfunction of heart.

HEARTBREAKING: “Can’t breathe, they removed the ventilator. It’s been 3hrs, I asked and they said u had enough. I feel that my heart stopped beating, nothing left in me.Bye daddy,bye everyone”-last video of 35yr old man who succumbed to #COVID Family wants video shared #Hyderabad pic.twitter.com/IeNiUwkoHj

Gasping during his last moments, Kumar succumbed to coronavirus on June 26. “Can’t breathe, they removed the ventilator. It’s been 3 hrs, I asked and they said u had enough. I feel that my heart stopped beating, nothing left in me. Bye daddy, bye everyone”, Kumar’s family shared the video of his last moments at the hospital. Reports inform that Ravi Kumar was admitted at Chest Hospital in on COVID-19 suspicion on June 24. Reports inform that two days after Kumar was admitted to the Chest hospital, the hospital staff handed over his dead body to the family, without providing the cause of death.

(The above story first appeared on LatestLY on Jun 29, 2020 09:37 AM IST. For more news and updates on politics, world, sports, entertainment and lifestyle, log on to our website latestly.com).