The Telangana government has declared a holiday for all government offices, private institutions, schools and all educational institutions on Tuesday in view of the heavy rains lashing the state under the impact of Cyclone 'Gulab'. 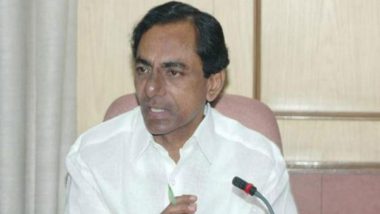 Hyderabad, September 27: The Telangana government has declared a holiday for all government offices, private institutions, schools and all educational institutions on Tuesday in view of the heavy rains lashing the state under the impact of Cyclone 'Gulab'. The decision was taken by Chief Minister K. Chandrasekhar Rao on Monday evening, while reviewing with Chief Secretary Somesh Kumar the situation created by the heavy rains across the state due to the impact of the cyclone. Cyclone Gulab: Govt Offices, Educational Institutions to Remain Closed in Telangana Tomorrow Amid Warning of Heavy Rainfall Warning.

The Chief Secretary later issued a Government Order declaring holiday due to incessant rains and imminent forecast of heavy rains. He said the employees of emergency departments like Revenue, Police, Fire Services, Municipal, Panchayati Raj, Irrigation, and Roads and Buildings should be on emergency duty to ensure that no property or lives are lost due to heavy rains.  Cyclone Gulab Impact: Heavy Rainfall To Lash Telangana During Next 24 Hours, IMD Issues Red Alert for 14 Districts.

Several parts of Telangana have been experiencing heavy rains since early Monday under impact of 'Gulab' which weakened into deep depression after crossing the Andhra-Odisha coast. Meanwhile, the Hyderabad Meteorological Centre said the deep depression weakened into a depression on Monday evening and lay centered over north Telangana and adjoining south Chhattisgarh and Vidarbha.

The heavy rains affected normal life in Hyderabad and other parts of the state. Rain water entered houses in some colonies, causing severe hardships to the residents. Inundation of roads led to traffic jams at various places in the state capital.

Hyderabad Police Commissioner Anjani Kumar and Greater Hyderabad Mayor Vijayalaxmi Gadwal urged the citizens to stay indoors. The met department issued a red alert to the state. It said there is flash flood risk till 6.30 p.m. on September 28. It forecast heavy to very heavy rains in most parts of the state during the next 24 hours. Extremely heavy rainfall is also predicted at isolated places in at least 14 districts.

(The above story first appeared on LatestLY on Sep 27, 2021 10:47 PM IST. For more news and updates on politics, world, sports, entertainment and lifestyle, log on to our website latestly.com).