Delhi Doctors' Protest: Satyendar Jain Takes a Dig at Municipal Corporation of Delhi, Says MCD Has Money for Hoardings But Not for Paying Doctors' Salaries

Delhi's Health Minister Satyendar Jain said, on Sunday, that MCD has money to put up hoarding but not to pay doctor's salaries. MCD had earlier blamed AAP for its empty coffers saying the Delhi-government owes them Rs 1,300 crore. Around 2000 doctors and medical staff have been on protest since July. 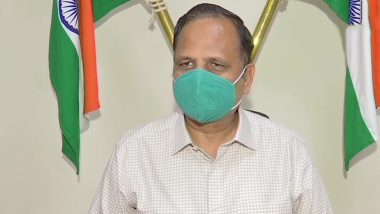 New Delhi, October 25:  Delhi Health Minister Satyendar Jain, on Sunday, said  "salaries are paid by Municipal Corporation of Delhi. Instead of paying doctors' salaries, don't know where MCD is spending its funds. “Targeting the MCD he added, "They've money for hoardings but not for salaries." Doctors of Delhi’s Hindu Rao Hospital Protest Over Non-Payment of Salaries.

This comes after MCD blamed the AAP government in Delhi for its empty coffers. Chhail Bihar Goswami, chairman of the municipal corporation's standing committee had earlier said, " the state government owes it almost ₹ 1,300 crore. So, we are unable to pay salaries."

Salaries are paid by Municipal Corporation of Delhi. Instead of paying doctors' salaries, don't know where MCD is spending its funds. They've money for hoardings but not for salaries: Delhi Health Minister Satyendar Jain on doctors' strike due to non-payment of salaries pic.twitter.com/yQeX2tSM4r

More than 2,000 healthcare workers, including doctors from Hindu Rao, Rajan Babu TB Hospital, and Kasturba Gandhi Hospital for Women are on an indefinite hunger strike against non-payment of salaries since July. All these hospitals come under the ambit of North Delhi Municipal Corporation. Delhi Resident Doctors of NDMC Hospitals to Protest Over Pending Salaries at Jantar Mantar Tomorrow.

Five doctors from the Hindu Rao hospital have been on indefinite hunger strike to pressurise the MCD for regular payment of salaries on a fixed date. Other protesting doctors have said they would take turns to fast with these five. Doctor and medical staff from the  Babu TB Hospital and Kasturba Gandhi hospital last week.

The protest gained momentum a month after doctors at the COVID-19-dedicated Hindu Rao stopped work after not receiving salaries despite repeated requests.

(The above story first appeared on LatestLY on Oct 25, 2020 01:07 PM IST. For more news and updates on politics, world, sports, entertainment and lifestyle, log on to our website latestly.com).