A single-judge bench of Justice Jasmeet Singh said that tapping phone lines or recording calls without consent violates the right to privacy under Article 21 of the Constitution. 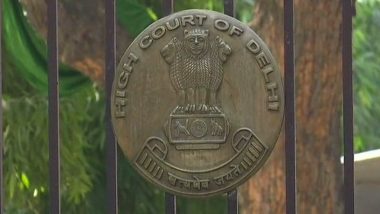 New Delhi, December 8: The Delhi High Court on Thursday, while granting bail to former Mumbai Police chief Sanjay Pandey in a money laundering case, observed that phone-tapping or recording calls without the individual's permission is "breach of privacy".

A single-judge bench of Justice Jasmeet Singh said that tapping phone lines or recording calls without consent violates the right to privacy under Article 21 of the Constitution. Delhi High Court Refuses To Entertain PIL Against Illegal Staying of Foreign Nationals.

"I am prima facie of the view that tapping phone lines or recording calls without consent is a breach of privacy. The right to privacy enshrined under Article 21 of the Constitution demands that phone calls not be recorded. Only with consent of the individuals concerned, can such activity be carried out otherwise it will amount to breach of the fundamental right to privacy," he said.

Pandey was named in a money laundering case by the Enforcement Directorate (ED). The ED in September this year had filed a charge sheet in a Delhi's Rouse Avenue court in connection with a Prevention of Money Laundering case pertaining to phone tapping of NSE employees between 2009 and 2017. Delhi High Court Issues Summons to Telegram Users in Copyright Infringement Case.

The ED's case was on the basis of the CBI's FIR, lodged on the directions of Union Ministry of Home Affairs. The charge sheet was filed against NSE's former chiefs Chitra Ramakrishna and Ravi Narain, and former Mumbai Police Commissioner Pandey. The ED had claimed that Pandey received Rs 4.54 crore to tap the MTNL lines to help Ramakrishna and these were proceeds of crime.

It was alleged that illegal tapping of MTNL phones was contrary to the Telegraph Act, several provisions of the Indian Penal Code (IPC), Prevention of Corruption Act as well as the Information Technology Act.

Justice Singh said that even though the NSE and iSec have breached privacy, but these prima facie violations do not constitute an offence under the Prevention of Money Laundering Act.

(The above story first appeared on LatestLY on Dec 08, 2022 10:19 PM IST. For more news and updates on politics, world, sports, entertainment and lifestyle, log on to our website latestly.com).