Prime Minister Narendra Modi on Saturday said Indian soldiers give a befitting response if anyone attempts to hurt the country. 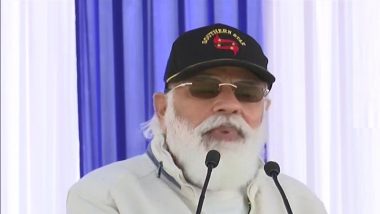 Jaisalmer, November 14: Prime Minister Narendra Modi, who is in Rajasthan's Jaisalmer to celebrate Diwali with defence personnel, on Saturday said Indian soldiers give a befitting response if anyone attempts to hurt the country. PM Narendra Modi lauded the valour and courage of Indian Army personnel and said his government took steps to modernise the military and address the needs of soldiers. Diwali 2020: PM Narendra Modi Celebrates Diwali With Defence Personnel at Longewala Post, Says 'Every Citizen Takes Pride in Bravery of Indian Soldiers'.

"If anyone casts an evil eye on us, our soldiers reply to them befittingly. This establishes the credibility of the Indian Army in the world," PM Modi said. "Today, the country's Army is engaged in military exercises with other big countries. We are engaged in strategic partnerships to fight against terrorism. Indian Armed Forces have shown that they can strike on terrorist havens anywhere, anytime," he added.

The Prime Minister's remarks came while addressing the Armed Forces on the Rajasthan border on the occasion of Diwali. He reached Rajasthan's Jaisalmer border to celebrate Diwali with the Forces in the morning, in continuation of his set tradition since he took over as the Prime Minister of India in 2014. He said the Armed Force not only combat with enemies but also help citizens when a tragedy strikes.

"While the Indian Armed Forces are capable of dealing with the enemies, they're at the forefront to help people during disasters. The role played by Air Force and Navy in rescuing people who were stranded in other countries due to COVID is praiseworthy," PM Modi said. "The Indian Armed Forces worked on a war footing during coronavirus pandemic and contributed at every level ensuring the availability of masks, sanitizers, PPE kits, medical equipment, and hospitals in the country," he elaborated.

"Our Air Force was at the forefront in rescuing people from Wuhan, the epicentre of coronavirus outbreak in China. There were some countries that left their people stranded in Wuhan, we not only rescued our people but also helped other countries," the Prime Minister further said.

(The above story first appeared on LatestLY on Nov 14, 2020 02:17 PM IST. For more news and updates on politics, world, sports, entertainment and lifestyle, log on to our website latestly.com).