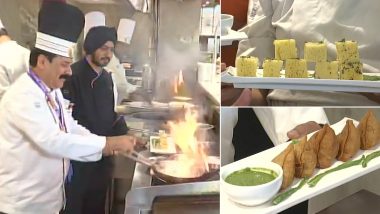 According to Khanna, President Trump and Melania will be served Gujarati food items such as Khaman, Gujarati ginger tea and broccolian-corn samosa at lunch. Ice tea, green tea and multi-grain cookies are also on the menu. "Special Khaman is being prepared as US President and First Lady Melania Trump like Khaman a lot. The menu includes only veg items and it will be cooked in Gujarati style," Khanna said. In Delhi, ITC Maurya’s restaurant Bukhara may offer a "Trump Platter" for the US President. Donald Trump, Melania Trump's India Visit: From Gold-Plated Tableware to Silver-Made Key, Grand Preparations Underway to Accord 'Memorable Welcome' to US President And First Lady.

The Bukhara restaurant, which has hosted several heads of states, including former US presidents, "Trump Platter" is a customised combination of dishes as per the flavours liked by President Trump, news agency PTI reported. The hotel, however, has not revealed anything about the arrangements made for Trump, including the food. Trump's predecessor Barack Obama was served "Obama Platter" when he visited India in 2010 and 2015. Tandoori jhinga, machhli tikka, murg boti Bukhara and kebabs were part of "Obama Platter". Donald Trump India Visit: US President's Three-Hour Stay in Ahmedabad to Cost Gujarat Exchequer Rs 100 Crore, Says Report.

When Bill Clinton had visited Bukhara as the US president, the hotel had introduced “Clinton Platter” and “Chelsea Platter”. Bukhara’s dishes are mainly tandoor based and has an assortment of kebabs, the signature ‘Dal Bukhara’ and breads like 'Khasta Roti' and 'Bharwan Kulcha'. Since PM Modi has assured to accord a "memorable welcome" to Trump and Melania, authorities are leaving no stone unturned to make their trip successful.

(The above story first appeared on LatestLY on Feb 24, 2020 08:36 AM IST. For more news and updates on politics, world, sports, entertainment and lifestyle, log on to our website latestly.com).