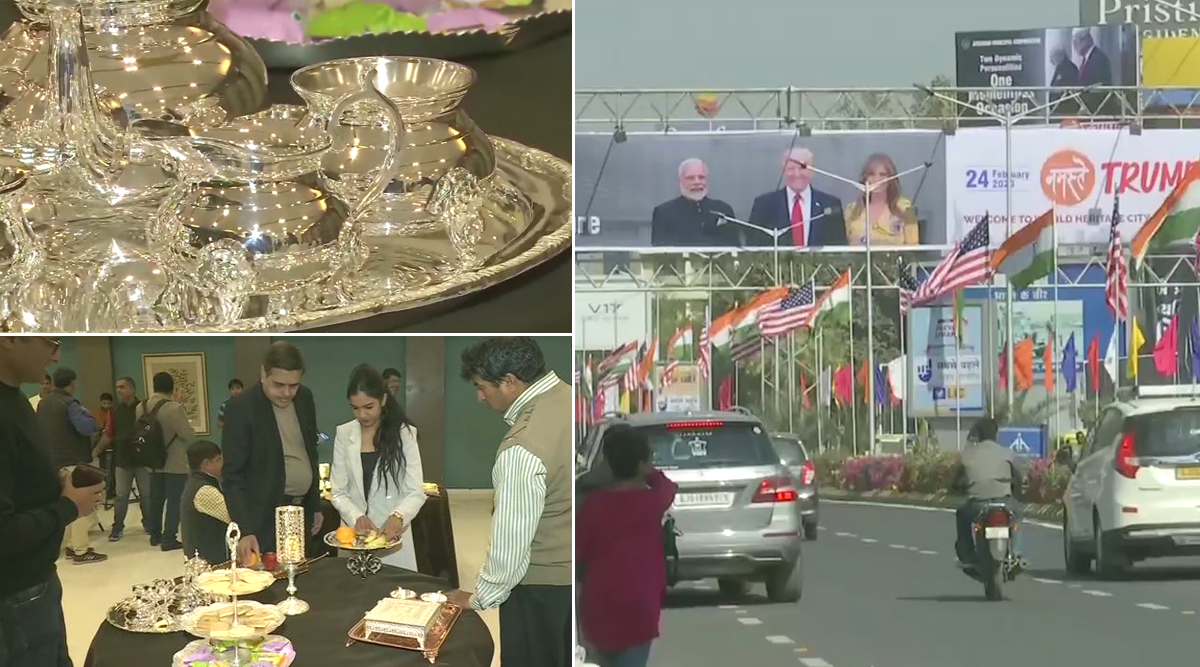 New Delhi, February 22: Grand preparations are underway to host US President Donald Trump and First Lady Melania Trump who will arrive in India on February 24. Prime Minister Narendra Modi has assured that India will accord a "memorable welcome" to Donald Trump and Melania Trump. Hence, authorities are leaving no stone unturned to keep the Prime Minister's promise. From hoardings to gold and silver-plated tableware, all is set for Trump's India visit. Donald Trump India Visit: US President's Three-Hour Stay in Ahmedabad to Cost Gujarat Exchequer Rs 100 Crore, Says Report.

Specially-designed tableware, plated with gold and silver, will be provided to Trump and his wife for personal use in the national capital. "It's a special design. We served ex-President Barack Obama also when he visited India," manufacturer Arun Pabuwal told news agency ANI. In Delhi, Malania will visit a government school in Nanakpura on February 25. "We have been beautifying the path through which Melania Trump will go to the school. All municipal departments are busy in the preparations," local councillor Manish Agrawal said. Donald Trump Looks Forward to India Visit, Tweets He Is 'Number 1' And PM Narendra Modi 'Number 2' on Facebook.

Gold and Silver-Plated Tableware For Donald Trump and Melania Trump:

In Agra, where Trump will visit the Taj Mahal, a key made of silver will be gifted to him. "The concept behind greeting guests with a key is to symbolically convey a message that they are welcome to unlock gates and enter Agra," city mayor Naveen Jain said. In Ahmedabad where Trump and Melania will land, scores of banners and hoardings inscribed with greetings to the visiting dignitaries have been put up along the route.

Preparations Underway in Agra and Ahmedabad:

Agra: Preparations underway, ahead of US President Donald Trump's visit to Agra on Feb 24. Rajiv Rathi, Executive Engineer, Municipal Corporation says,"Work related to infrastructure development has been completed,now we are focusing on cleanliness & beautification of streets." pic.twitter.com/A1yFCp0c2W

Gujarat: Ahmedabad gets ready for visit of US President Donald J Trump on 24th February pic.twitter.com/qRmm2lEmgz

From Sardar Vallabhbhai Patel International Airport, Trump will be joined by PM Narendra Modi during a roadshow till Motera Stadium, also known as Sardar Patel stadium. Trump will inaugurate the newly-constructed cricket ground and address a large gather as part of "Namaste Trump" event. Security has been tightened up across Ahmedabad ahead of the US President's visit. This will be President Trump's first visit to India.

Ahmedabad Commissioner of Police Ajay Tomar stated that security personnel will also be deployed along the roads from where the convoy of PM Modi and President Trump will pass on February 24.