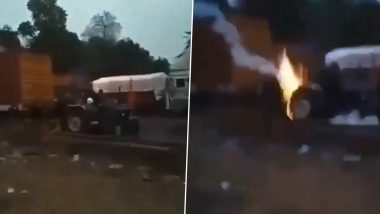 Jaipur, January 3: Clashes erupted between police and farmers protesting on the Delhi-Jaipur highway near Bhudla-Sangwari village on Sunday. The farmers were protesting on the highway from the past few days. According to reports, clashes erupted after farmers’ reached Masani barrage near Dharuhera town. Police reportedly fired tear gas shells to stop the farmers.

On Sunday, farmers covered 4 km from their previous halt when the clashes erupted. During the clashes, a tractor caught fire. However, the fire was doused off. According to reports, farmers were trying to move towards the national capital, and the police blocked the road. Several videos of the clashes between farmers and police also surfaced on social media. Farmers Will Burn Copies of Farm Laws on Lohri, Kisan Diwas Will Be Celebrated on January 23, Says Farmers' leader Manjeet Singh Rai.

In one of the videos shared by journalist Saahil Murali Menghani, police could be seen firing tear gas shells. According to a report published in The Tribune, farmers from the Tikri border joined another group of protesting farmers at Bhudla-Sangwari village and decided to move ahead. Farmers were then stopped at Masani barrage by the police. Farmers' Protest: 'If Our Demands Are Not Accepted, We Will Hold March at Kundli-Manesar-Palwal on January 6', Says Yogendra Yadav.

👉This is not LoC but Jaipur-Delhi highway

👉It's raining tear-gas shells on farmers

👉Situation continues to remain tense less than 60 KMs from Delhi

Meanwhile, farmers’ protest against controversial farm laws entered 37th day today. Farmers on Sunday threatened to burn copies of the law on Lohri. The announced by farmers’ leaders came a day ahead of the seventh round of talks with the Centre to break the deadlock over the laws. The last round of talks held on December 30.

The Central government agreed to keep farmers out of the penal provisions of the Commission for the Air Quality Management in National Capital Region and Adjoining Areas Ordinance, 2020, and to withdraw the Electricity Amendment Bill 2020. However, the farmers demanded the complete rollback of the laws.

(The above story first appeared on LatestLY on Jan 03, 2021 10:37 PM IST. For more news and updates on politics, world, sports, entertainment and lifestyle, log on to our website latestly.com).