Farmers protesting against the new farm laws has started their tractor parade from three sites- Singhu, Tikri, and Ghazipur borders on Tuesday as the country celebrates the 72nd Republic Day. They entered the national capital by breaking the police barricades. The police in the national capital and neighbouring states are on alert and trying to disperse the protesters. 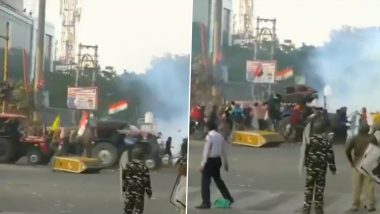 New Delhi, January 26: Samyukt Kisan Morcha (SKM) has called off Kisan Republic Day Parade with immediate effect after incidents of violence were reported from several places of the national capital. It appealed to all participants to immediately return to their respective protest sites. Notably,  farmers protesting against the new farm laws  had started their tractor parade  from three sites- Singhu, Tikri, and Ghazipur borders on Tuesday as the country celebrated the 72nd  Republic Day. They entered the national capital by breaking the police barricade. Tractor Rally on January 26 Against Farm Laws: From Routes, Estimated Tractors on Road to Security Arrangements, Here's All About the Mega Rally on Republic Day 2021.

The SKM in a statement said, "Samyukt Kisan Morcha has called off the Kisan Republic Day Parade with immediate effect, and has appealed to all the participants to immediately return to their respective protest sites. The movement will continue peacefully and further steps will be discussed and decided soon."

Meanwhile, the Bharatiya Kisan Union (BKU) on Tuesday condoled the incident of flag hoisting at the Red fort and accused the Delhi Police of "negligence" as they did not support the farmers' protest. Speaking to IANS after returning from the tractor rally, BKU spokesperson Rakesh Tikait said, "Whatever happened today was due to the negligence on the part of Delhi Police. They did not support us and they were unable to control the huge number of farmers."

Protestors even broke the police barricades at Peeragarhi Chowk and  are moving towards Punjab Bagh in Delhi. The Union Home Ministry has ordered to temporarily suspend internet services in border areas of Delhi - Singhu, Ghazipur, Tikri, Mukarba Chowk, Nagloi- from 12:00 pm to 11:59 pm after clashes between protesting farmers and security personnel escalated.

"Rally is going on peacefully. I don't have any knowledge of it. We are at Ghazipur and are releasing the traffic here," said Rakesh Tikait, the Spokesperson, Bharatiya Kisan Union (BKU) when asked about incidents of violence at some locations, during the tractor rally, as reported by ANI.

Meanwhile, the police in the national capital and neighbouring states are on alert and  trying to disperse the protesters.  The Delhi Police  resorted to lathi charge and tear gas at the Singhu border after protesting farmers breached barricades set up to thwart them from entering the national capital. The police had given farmers permission to enter the city after the official Republic Day parade at Rajpath.

#WATCH Police use tear gas on farmers who have arrived at Delhi's Sanjay Gandhi Transport Nagar from Singhu border#Delhi pic.twitter.com/fPriKAGvf9

The farmers have been protesting on different borders of Delhi since November 26, 2020, against the three farm laws. There has been no agreement between the Centre and the protesting farmers despite eleven rounds of talks between them. The agitating farmers demand complete withdrawal of the laws and legal guarantee for MSP. The Centre has offered to suspend the laws for up to 18 months at a meeting with farm unions on 20 January.

(The above story first appeared on LatestLY on Jan 26, 2021 01:12 PM IST. For more news and updates on politics, world, sports, entertainment and lifestyle, log on to our website latestly.com).