A tractor parade on Tuesday that was to highlight the demands of the farmer unions to repeal the three new agriculture laws descended into anarchy as tens of thousands of protesters broke through barriers, fought with police, overturned vehicles and hoisted a religious flag from the ramparts of the iconic Red Fort. 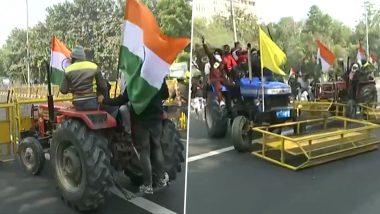 New Delhi, January 27: Six Delhi Transport Corporation (DTC) buses and five police vehicles were damaged in the violence that broke out at ITO during the farmers' tractor parade in the national capital on Republic Day, according to an FIR registered in connection with the incident. It also claimed that several police personnel were injured and 70 iron barricades damaged when over 10,000 protesting farmers on nearly 600 tractors stormed the area.

The Delhi Police stated the protestors tried to enter Luytens' Delhi from Tilak Bridge despite not given permission to hold the tractor parade in the jurisdiction of IP Estate Police station where the first information report (FIR) was registered.

According to the FIR, the farmers smashed the barricades and hit DTC buses stationed at ITO with their tractors and also tried to run over police personnel.

"Police tried to convince the agitating farmers. However, they were adamant about going to Luytens' area. They also damaged vehicles and equipment of mediapersons," it stated, adding that police used tear gas to disperse the protesters from the spot. Farmers' Tractor Rally: Delhi Police to Hold Press Briefing, Security Tightened, Heavy Traffic Congestion as Many Roads Shut a Day After Red Fort Violence.

A tractor parade on Tuesday that was to highlight the demands of the farmer unions to repeal the three new agriculture laws descended into anarchy as tens of thousands of protesters broke through barriers, fought with police, overturned vehicles and hoisted a religious flag from the ramparts of the iconic Red Fort.

While police used teargas shells to disperse the restive crowds in some places, hundreds of farmers were seen chasing them with sticks at the ITO in the heart of the national capital.

"Police personnel were present at Ram Charan Aggarwal Chowk, ITO. Around 12 pm from Sarai Kale Khan towards MGM Marg, 500 to 600 tractors carrying around 9,000 to 10,000 protestors entered the ITO," the police said in the FIR.

It claimed that a tractor, going to DDU Marg from Ram Charan Chowk, hit a barricade placed near Andhra Public School while being driven rashly, and overturned.

While police personnel and others were trying to rescue the driver from under the tractor, the other protesters on tractors reached there and tried to run over the police, it stated.

Some of the protesters took the driver to ITO Chowk. Later, they took him and his tractor along with them and left the area. The deceased was later identified as Navneet Singh, a resident of Rampur district in Uttar Pradesh, the FIR stated.

Police said in the FIR that during demonstration, six DTC buses, five police vehicles and 70 iron barricades were damaged. Several police personnel were also got injured during the incident. Sunny Deol and Several Farmer Leaders Distance Themselves From Deep Sidhu After He Was Seen Hoisting Flag at Red Fort.

The Delhi Police has registered 22 FIRs so far in connection with the violence that broke out during the farmers' tractor parade in the national capital leaving over 300 policemen injured, officials said on Wednesday.

An official said multiple videos and CCTV footage are being scanned to identify farmers involved in the Tuesday violence and strict action will be taken against them.

Security has been beefed up in several places across the national capital, especially at the Red Fort and farmer protest sites, with deployment of additional paramilitary forces following the violence.