By April this year, there were a total of 3,470 unmanned level crossings. Accidents at the crossings has contributed to the maximum number of deaths caused by the Railways in the last decade. 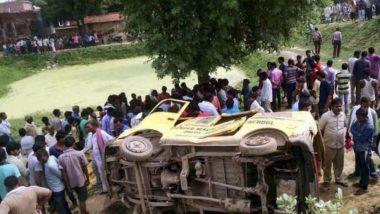 Accident at an unmanned railway crossing in Kushinagar in April | (Photo Credits: PTI)

New Delhi, Sept 17: Five months after the fatal accident in Kushinagar which claimed 13 lives, the Indian Railways has eliminated all unmanned crossings on major routes. The crossings have either been removed through construction of subways for local commuters, or deployment of ex-servicemen to guard the crossings.

In April this year, a vehicle ferrying school children was rammed into by a speeding train at an unmanned crossing in Kushinagar, killing 13 people. Under flak, Railway Minister Piyush Goyal had then promised to address the issue of unmanned crossings at the earliest.

By the end of September, claim the records of Railways accessed by The Indian Express, only around 600 unmanned crossings would be left. In the near future, the Railway would eliminate them as well, said an official, adding that they lie mostly on low traffic routes.

Notably, all railway lines where the train speed is 130 km/hr are now free of the unmanned crossings. Due to the drive, the Guwahati-based Northeast Frontier Railway has become completely free of unmanned level crossings. In the past year, the feat was achieved by Central, Eastern, South East Central and West Central.

By April this year, there were a total of 3,470 unmanned level crossings. Accidents at the crossings has contributed to the maximum number of deaths caused by the Railways in the last decade. Since 2007, 1,272 people have been killed in accidents at such crossings, with the highest being recorded in 2011-12 when 204 people had died.

(The above story first appeared on LatestLY on Sep 17, 2018 04:09 PM IST. For more news and updates on politics, world, sports, entertainment and lifestyle, log on to our website latestly.com).