German National, a Wanted Criminal Who Was Stranded at Delhi Airport For 55 Days Due to Lockdown, Leaves India On Board KLM Flight to Amsterdam 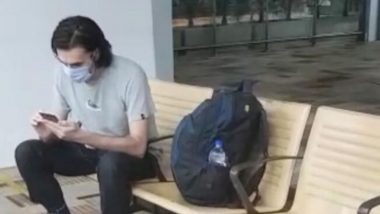 New Delhi, May 12: A 40-year-old German national who was stranded at the transit area of Delhi airport for the past 55 days due to lockdown, left India today early morning. According to an ANI update, the man reportedly boarded a KLM flight to Amsterdam.  He tested negative for COVID-19 before taking the flight. The German national identified as Edgard Ziebat is also a wanted criminal in his country.

According to reports, Ziebat was recently served a “Leave India Notice” by authorities. He, however, had said that he would leave India as soon as international flights resume after the national lockdown, and wanted to stay at the airport until then. The airport authorities had asked the 40-year-old German national to board a special flight to Germany, which was operated under the Germany Embassy in Delhi, but neither the embassy nor the airlines agreed to take him on board. Meanwhile, Turkish Airline refused to take him on board because he was not carrying a Turkish passport.

Ziebat was living in the Airport since March 18 and he arrived in the national capital from Hanoi as a transit passenger on his way to Istanbul.  After India banned all international flights,  Ziebat could neither exit India nor the airport’s transit area, because he did not have an Indian visa. India Records Spike of 3,604 COVID-19 Cases & 87 Deaths in Past 24 Hours, Coronavirus Count Reaches 70,756, Death Toll Rises to 2,293.

A German national who was stranded at the transit area of Delhi airport for the past 55 days due to lockdown, left India today early morning by KLM flight to Amsterdam. He tested negative for COVID19 before boarding: Sources pic.twitter.com/Z7sWTxYYmI

While he was staying inside the airport, the authorities provided mosquito net, recliner, food and other basic necessities. He was often found talking to his friends and family over the phone, taking a stroll inside the airport premises and interacting with the housekeeping staff. He also used the Airport's washroom and would also eat at the food outlets at the terminal whenever they opened, according to a Hindustan Times report.

(The above story first appeared on LatestLY on May 12, 2020 11:03 AM IST. For more news and updates on politics, world, sports, entertainment and lifestyle, log on to our website latestly.com).