Police in Uttar Pradesh's Ghaziabad has "rewarded" two women with a hefty fine of Rs 11,000 after a video of them doing stunt on a bike went viral on social media. 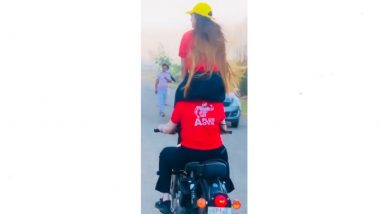 Ghaziabad, March 16: Police in Uttar Pradesh's Ghaziabad has "rewarded" two women with a hefty fine of Rs 11,000 after a video of them doing stunt on a bike went viral on social media. In a post on Twitter, the Ghaziabad police said the two women, seen in the viral video, were issued challans for not wearing helmet, racing without permission and violating other driving rules. The action comes after the video went viral. Uttar Pradesh Man Shares Stunt Video Performing Push-Ups on Moving Car; Watch UP Police's Hilarious Reaction.

In the video, a woman is seen riding a Bullet bike and carrying another woman on her shoulder. They were donning t-shirts of a particular gymnasium located in Ghaziabad's Govindpuram area. None of them were wearing helmets. A video of the duo doing stunt went viral after which police took action and imposed a fine of Rs 11,000 on them. Mumbai Man, Seen Performing Handstand on High-Rise Building in Viral Video, Arrested by Police.

The two women were charged Rs 1000 for "driving two-wheeled without helmets", Rs 5000 for "without written permission of state government racing and trials of speed in any public place" and Rs 5000 for "driving vehicles in contravention of Section 3 or Section 4", according to the Ghaziabad police.

"Follow traffic rules. Do not put your and others' lives in danger," the police said in the tweet. The identities of the two women remained unknown. It also remain unclear if the video was recorded for a promotion purpose.

(The above story first appeared on LatestLY on Mar 16, 2021 01:21 PM IST. For more news and updates on politics, world, sports, entertainment and lifestyle, log on to our website latestly.com).