A journalist was assaulted and shot at in front of his two daughters in Ghaziabad near Delhi on Monday night. 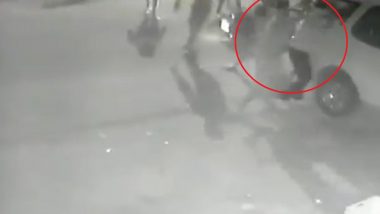 Ghaziabad, July 21: A journalist was assaulted and shot at in front of his two daughters in Ghaziabad near Delhi on Monday night allegedly for protesting against eve-teasing. The attack, which took place in Vijay Nagar when journalist Vikram Joshi was travelling on a motorcycle with his two daughters, was caught on a CCTV camera. The police have arrested nine persons, including the main accused who opened fire at Vikram Joshi. Police station in-charge has also been suspended. Ghaziabad Shocker: Class 6 Boy Allegedly Harasses Woman, Threatens to Leak Her Morphed Photos If She Didn't Engage in Sex chat.

The video of the incident showed Joshi riding his motorcycle with his two daughters. Suddenly, the bike swerved and in no time, a group of men surround the bike and start beating the journalist. The daughters can be seen running away soon after their father was attacked. The attackers can be seen dragging Joshi towards a car and hitting him.

One of the attackers also opened fire at Joshi before they fled. The shooting, however, is unclear in the video. The elder daughter then came to him screaming for help. She can be seen sitting on the road next to her father and trying to stop vehicles or people passing by. A couple of people then rushed to the injured journo. Joshi was rushed to a private hospital in critical condition.

CCTV footage of journalist Vikram Joshi in UP's Ghaziabad waylaid by armed assailants, assaulted in the middle of a busy street and shot at in the head. Joshi, in critical condition now, had recently made a police complaint against local goons for harassing her niece. pic.twitter.com/yiCkKJgWQ9

The journalist received a bullet injury on his head. According to the police, all accused were known to Joshi's family. They believe the attack could be a retaliation of a complaint that Joshi lodged against a group of men who allegedly harassed his niece.

(The above story first appeared on LatestLY on Jul 21, 2020 01:00 PM IST. For more news and updates on politics, world, sports, entertainment and lifestyle, log on to our website latestly.com).