In a poll promise made with an eye on the 2022 state assembly, Goa Forward, a regional opposition party in the state, has promised to reserve 80 per cent jobs for ethnic Goans in the private sector. 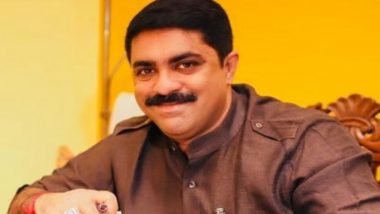 Panaji, Nov 28: In a poll promise made with an eye on the 2022 state assembly, Goa Forward, a regional opposition party in the state, has promised to reserve 80 per cent jobs for ethnic Goans in the private sector.

Making the announcement on Saturday, former deputy Chief Minister Vijai Sardesai also said that if voted to power, the party would also assure 100 per cent employment to Goans when it comes to government jobs. Government Jobs in Goa: CM Pramod Sawant Announces Recruitment for 10,000 Govt Vacancies.

"We are setting the tone for a manifesto promise, which will make 80 per cent employment to locals a law, if we come back to power and 100 per cent (employment) in the government sector," Sardesai said, promising a systematic approach to employment.

The Goa Forward currently has three MLAs in the 40 member Goa legislative assembly. Sardesai had briefly served as a deputy Chief Minister in the Chief Minister Pramod Sawant-led cabinet, but was sacked within days, after the 10 Congress MLAs split from the party and joined the BJP last year.

Sardesai also said that a recent announcement by Chief Minister Pramod Sawant, announcing the opening up of 10,000 government jobs by January as a fake promise with an eye on the upcoming zilla panchayat and municipality polls.

Unemployment is expected to be a key agenda for all political parties ahead of the 2022 assembly polls, with even Chief Minister Pramod Sawant stating on numerous occasions, that the issue of dearth of jobs was emerging as a serious concern for the youth in the coastal state.

(The above story first appeared on LatestLY on Nov 28, 2020 03:41 PM IST. For more news and updates on politics, world, sports, entertainment and lifestyle, log on to our website latestly.com).