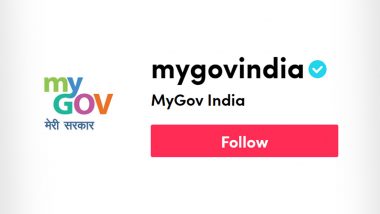 New Delhi, June 29: The Government of India deleted its account on the video-sharing app TikTok on Monday. The development came moments after the Centre banned 59 Chinese apps in India, including TikTok, ShareIt, UC Browser and Helo. The government created its official TikTok account earlier this month. The account of MyGov on TikTok had over 949k followers. The profile of MyGoV India account had read, “Citizen engagement platform of Government of India”

The videos upload on the account was mostly coronavirus awareness and yoga. Celebrity videos featuring Sachin Tendulkar, Virat Kohli etc were also uploaded. The government faced criticism for creating its TikTok account amid border row with China in Ladakh and rising demand of banning Chinese products in the country.

On Monday, the Centre banned 59 Chinese mobile apps. The government in a statement said, “It has decided to block 59 apps ( see Appendix) since in view of information available they are engaged in activities which is prejudicial to sovereignty and integrity of India, defence of India, security of state and public order.” TikTok Downloads Fall Over 50 Percent in India in March And April Amid Calls For Boycott of Chinese App.

Here is The List of Apps Chinese App Banned in India:

List of 59 apps banned by Government of India "which are prejudicial to sovereignty and integrity of India, defence of India, security of state and public order”. pic.twitter.com/p6T2Tcd5rI

(The above story first appeared on LatestLY on Jun 29, 2020 10:47 PM IST. For more news and updates on politics, world, sports, entertainment and lifestyle, log on to our website latestly.com).