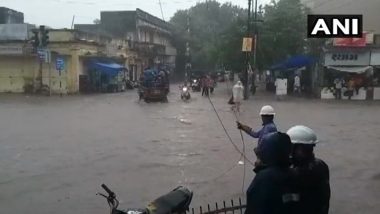 Gujarat, July 6: Heavy rains lashed several districts of Gujarat on Sunday. Flooding was reported in parts of Dwarka due to the heavy rains. The Saurashtra region witnessed the wettest day of this monsoon season as districts like Gir Somnath, Junagadh, Amreli, Devbhoomi Dwarka received intense rainfall on Sunday.

The water level of the Shetrunji river increased in Junagadh following incessant rainfall in the region. Porbandar received heavy rainfall of 10 inches while Devbhoomi Dwarka got 12-inch rainfall. Junagarh and Gir Somnath reported rainfall of 5 inches and 3 inches respectively on Sunday. Mumbai Monsoon Forecast 2020: IMD Predicts Heavy Rainfall to Continue in Financial Capital For Next 24 Hours, Advises Fishermen Not to Venture Along the Coast.

Flooding in parts of Dwarka, following heavy rainfall in the region:

The rains also claimed lives, including a farmer who was killed after being struck by lightning in Surendranagar, on the other hand, a man transporting carcasses of domestic animals went missing after being washed away in a flooded causeway in Rajkot city. The India Meteorological Department (IMD) has issued a forecast of an active spell across the state till July 9

(The above story first appeared on LatestLY on Jul 06, 2020 07:49 AM IST. For more news and updates on politics, world, sports, entertainment and lifestyle, log on to our website latestly.com).