The Karnataka High Court is scheduled to pronounce the judgment on the hijab row on Monday. The special bench constituted to look into the issue will read out the verdict at about 10.30 a.m. 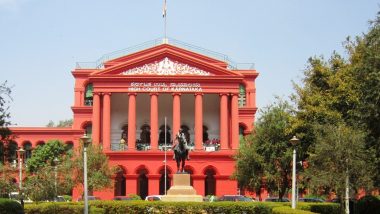 Bengaluru, March 15: The Karnataka High Court is scheduled to pronounce the judgment on the hijab row on Monday. The special bench constituted to look into the issue will read out the verdict at about 10.30 a.m.

As a precautionary measure, security has been beefed up across the state. Holiday has been declared in the districts of Dakshina Kannada, Kalaburagi and Shivamogga for the schools and colleges on Monday.

Most of the districts have imposed prohibitory orders in the surrounding areas of the educational institutions. Bengaluru Police Commissioner Kamal Pant has issued prohibitory orders restricting protests, celebrations and gatherings in the entire city for seven days from Monday. Hijab Row Verdict: Section 144 Imposed in Kalaburagi Till March 19.

The Hijab row, which started as a protest by six students of the Udupi Pre-University Girl's College, turned into a big crisis. The issue has become a matter of discussion at the international levels also. The bench headed by the Chief Justice Ritu Raj Awasthi, Justice Krishna S. Dixit and Justice Jaiunnesa Mohiyuddin Khaji heard the matter on a daily basis.

It was also brought to the notice of the court that many Islamic and European countries have banned hijab. The verdict is expected to leave a precedent in the country and have a serious impact. Presently, the High Court special bench interim order is in place banning the hijab and saffron shawls in schools and colleges.

(The above story first appeared on LatestLY on Mar 15, 2022 10:06 AM IST. For more news and updates on politics, world, sports, entertainment and lifestyle, log on to our website latestly.com).