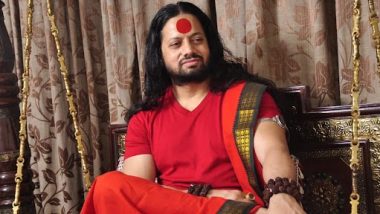 Gwalior, January30: While the country observed Mahatma Gandhi's death anniversary as Martyr's Day on Sunday, The Akhil Bharatiya Hindu Mahasabha celebrated Mahatma Gandhi's death anniversary as Godse-Apte Smriti diwas in Gwalior on Sunday. Not only this, five people including Kalicharan Maharaj, who promoted Godse's ideas, were also honored with 'Godse-Apte Bharat Ratna'. All of them had made derogatory remarks against Mahatma Gandhi during a dharam sansad held in Raipur.

Hindu Mahasabha's national vice president Jaiveer Bharadwaj said that they performed 'aarti' of Bharat Mata with a resolve to integrate India with Pakistan to make it 'Akhand Bharat'. They were observing January 30 as the 'Godse Apte Smriti Diwas' day to express their anger over their arrest on January 30, 1948.  Kalicharan Maharaj Arrested: Maharashtra Police Takes Custody of 'Godman' in Hate Speech Case

Bharadwaj said the Mahasabha had honoured Kalicharan Maharaj and four leaders of Hindu Mahasabha with the "Godse-Apte Bharat Ratna".

As Kalicharan Maharaj was in jail, the honour was received by Pramod Lohpatre on his behalf, Bharadwaj added.

Mahasabha pays tribute and respects all the revolutionaries, he added.

Congress has protested against the "Godse Bharat Ratna" award ceremony of Hindu Mahasabha. Objecting to the organization of Hindu Mahasabha, Congress MLA Satish Sikarwar said that Mahatma Gandhi was assassinated in 1948, but now people promoting Godse's ideas are killing Gandhi ji every day. Therefore, the administration should register a case of sedition against such events.

When BJP state President VD Sharma was asked about the Mahasabha honouring Kalicharan and others with "Godse Apte Bharat Ratna", he said that it was the incumbent BJP government at the Centre which had taken Mahatma Gandhi's work to the people.  Kalicharan Maharaj Again Arrested By Thane Police For Remarks Against Mahatma Gandhi

"There is a process of providing 'Bharat Ratna' by the Centre. It can't be given to anybody standing on the road," he said, concluding that there is freedom of expression in the country.

(The above story first appeared on LatestLY on Jan 30, 2022 11:04 PM IST. For more news and updates on politics, world, sports, entertainment and lifestyle, log on to our website latestly.com).