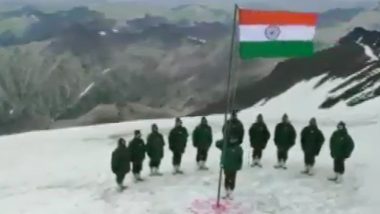 In the video, the national anthem was played after the flag was hoisted. The entire area was covered with snow. Social distancing measures were followed as the celebrations took place amid the coronavirus pandemic. Reacting to the video, netizens hailed Indian Army soldiers for their commitment and dedications towards their duty. Prime Minister Announces National Digital Health Mission, Speaks on Aatma Nirbhar Bharat Vision; Here Are Highlights of His August 15 Speech.

Meanwhile, Indian Army dogs Vida and Sophie were awarded the Chief of Army Staff 'Commendation Cards' on this Independence Day. The Indian Army dogs were honoured for their role in different operations.

Prime Minister Narendra Modi on Saturday unfurled the National Flag for the seventh time from the ramparts of Red Fort. In his address. PM Modi spoke against expansionism and a range of issues including coronavirus vaccine, adding that 130 crore Indians have pledged to make India self-reliant (Aatma Nirbhar).

(The above story first appeared on LatestLY on Aug 15, 2020 03:45 PM IST. For more news and updates on politics, world, sports, entertainment and lifestyle, log on to our website latestly.com).