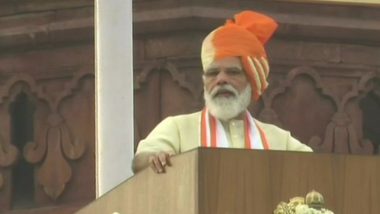 New Delhi, August 15: Prime Minister Narendra Modi spoke on a range of issues in his Independence Day speech on Saturday. Speaking from ramparts of the historic Red Fort in Delhi, PM Narendra Modi reiterated his pitch for a self-reliant India (Aatma Nirbhar Bharat) and announced National Digital Health System amid the coronavirus pandemic. Referring to the British Empire that ruled India for two centuries and recent Chinese aggression in Ladakh, PM Modi condemned policy of expansionism. He also mentioned the construction of Ram Mandir in Ayodhya, abrogation of Article 370 in Jammu and Kashmir and New Education Policy 2020 in his speech that lasted for over 80 minutes. PM Narendra Modi Independence Day 2020 Speech Highlights.

Raising his pitch for Aatma Nirbhar Bharat, PM Narendra Modi said 130 crore Indians took the resolve to be self-reliant. "I am confident that India will realise this dream. I am confident of the abilities, confidence and potential of my fellow Indians. Once we decide to do something, we do not rest until we achieve that goal," the Prime Minister asserted. Independence Day 2020: PM Narendra Modi Wishes Indians on 74th I-Day, Read His Tweet Here.

The world is eagerly waiting for a vaccine that can protect against coronavirus (COVID-19) infection. Prime Minister Narendra Modi, in his Independence Day speech, assured citizens that India will soon develop a vaccine. "I would like to assure all the citizens that our scientists are working hard for the development of vaccine," PM Modi said, adding that three potential drugs are undergoing trials at different stages.

PM Modi hailed Indian soldiers for protecting the country's borders. "From LoC to LAC, our brave soldiers gave a befitting reply to all those who tried to threaten our national security," PM Modi said, referring to ceasefire violations by Pakistan and the Chinese aggression in Ladakh. He paid tributes to 20 Indian soldiers who sacrificed their lives during a face-off with Chinese troops in Galwan valley.

The construction of Ram temple in Ayodhya also found mention in PM Modi's Independence Day speech. "We recently laid the foundation stone for Ram Temple construction in Ayodhya. I laud the way people maintained peace and tranquillity," the Prime Minister said, referring to the second-lengthiest case which was settled after the Supreme Court delivered its verdict last year.

In his Independence Day address, PM Modi said his government will spend Rs 100 lakh crore for various infrastructure projects. "There is a need to give a new direction to the overall infrastructure development of the country. This need will be met from the National Infrastructure Pipeline Project. The country is going to spend more than Rs 100 lakh crore on this. About 7,000 projects of different sectors have also been identified. It will bring a new revolution in infrastructure sector," the Prime Minister said.

(The above story first appeared on LatestLY on Aug 15, 2020 09:40 AM IST. For more news and updates on politics, world, sports, entertainment and lifestyle, log on to our website latestly.com).