Home COVID-19 Testing Kits to Be Available in Market in Next 3-4 Days, Says ICMR 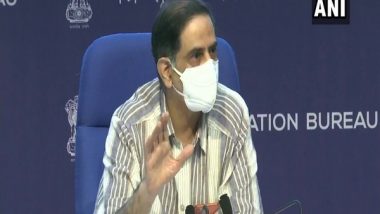 New Delhi, May 20: At-home COVID-19 tests should be available in the market in the next three to four days, the Indian Council of Medical Research (ICMR) said on Thursday. While speaking at a press briefing in Delhi, Dr Balram Bhargava, Director General of the ICMR informed that results for home COVID testing will be processed and delivered through a mobile application.

"Step 1 is that you buy the test kit from a chemist, Step 2 - download the mobile app. Step 3- conduct the test at home. Step 4 - click a mobile image and upload. The test result will be given," Bhargava explained.

He added, "This ensures patient confidentiality, data is stored in a secure server and it is linked with the ICMR database. This should be available in the market within three to four days. One company has approval for home testing kits, three more are in the pipeline." Mucormycosis in India: Centre Asks States to Notify Black Fungus Under Epidemic Diseases Act 1897.

The ICMR DG further said that over 20 lakh tests were conducted on May 18 and 19 across the country, the highest ever figures. Despite this, the positivity rate has dropped to about 13 per cent.

"More Rapid Antigen Tests should be done because you can get results rapidly and then isolate the patient quickly," he added. Bhargava further said that the Defence Research and Development Organisation's 2-DG drug is not a new medicine and has been repurposed. "The DRDO's 2-DG drug is a repurposed medicine, not a new medicine. It was earlier used for cancer treatment. Its trial results have been given to DCGI," the said.