The association said that Amazon is doing business in India with the strategy of deftly dodging the regulators and politicians. E-commerce companies promote sales on their platforms through their own preferred sellers. 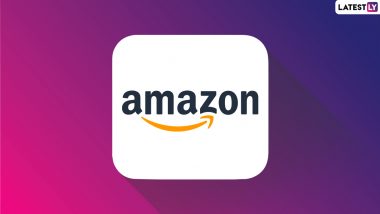 New Delhi, March 2: The All India Mobile Retailers Association (AIMRA) has written a letter to Prime Minister Narendra Modi, stressing that Amazon's operations in India should be suspended until a probe into the company is done. AIMRA, a trade union that represents more than 1.5 lakh mobile

phone retailers in the country, said that Amazon, along with leading mobile brands, have joined hands to derail the retail industry and put small retailers' life in danger.

The association said that Amazon is doing business in India with the strategy of deftly dodging the regulators and politicians. E-commerce companies promote sales on their platforms through their own preferred sellers. OnePlus Hints Launch of OnePlus 9 Series via Online Teaser on Amazon India.

"Unfortunately, E-commemrce companies often are the stakeholders of these preferred sellers. Since 2014, mobile brands have had exclusive tie-up for sales with these very preferred sellers. All stocks are given to the preferred seller so that the e-com platform can show non-involvement and do not suffer any implications," Arvinder Khurana, National President, AIMRA in the letter that was sent to Modi on Monday.

"This is basically a cover up of the alliance between brands and e-com companies to show that the word of the law is being followed, even though the spirit of the law is absent," he added.

To further cover up this exclusive cartel, "online selling is barred for local retailers by the brands and on the other hand the commission asked by E-com companies is as much as the margin allotted to the seller by the brand," the mobile retailers' industry body said.

"Not only that, Amazon is using this ploy to register small traders but making it difficult for them to sell their products online with tough rules and miniscule margins," Khurana argued. Amazon was yet to react to the AIMRA letter.

After several years of growth, the India smartphone market exited 2020 at 150 million (15 crore) units, a 1.7 per cent (year-over-year) decline, according to the International Data Corporation (IDC).

Online channels were likely to account for a highest-ever 45 per cent share of smartphone sales in 2020. Among the online channels, Flipkart is likely to hold top position while Amazon will grow the fastest.

According to Khurana, they have seven crore traders in India whereas Amazon shows only four lakh, out of which the top 35 sellers are doing nearly 80 per cent businesses.

"Which is why it is imperative to curtail sales of each seller at 5 lakh to put an end to the fraudulent ways of all e-commerce businesses," he emphasised.

The Confederation of All India Traders (CAIT) has also threatened to launch a nationwide campaign against the ecommerce giants for their alleged business malpractices and issues related to GST evasion.

(The above story first appeared on LatestLY on Mar 02, 2021 07:26 PM IST. For more news and updates on politics, world, sports, entertainment and lifestyle, log on to our website latestly.com).