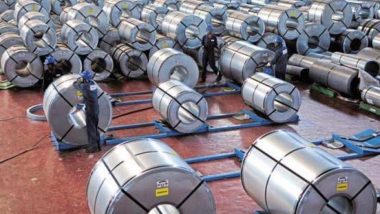 New Delhi, July 31: The production rate of India's eight major industries remained deep in the red in June 2020, official data showed on Friday. However, the rate of fall in the Index of Eight Core Industries decelerated on a sequential basis on account of opening up of economic activities. India's Retail Inflation Rate Rises to 6.09% in June Due to Increase in Prices of Food Items.

In a statement, the Office of Economic Adviser, Department for Promotion of Industry and Internal Trade, said: "Its cumulative growth during April to June 2020-21 was (-)24.6 per cent." "Final growth rate of Index of Eight Core Industries for March 2020 is revised at (-) 8.6 per cent."

The eight core industries comprise coal, crude oil, natural gas, refinery products, fertilisers, steel, cement, and electricity. The ECI comprises over 40 per cent of the weight of items included in the Index of Industrial Production (IIP).

(The above story first appeared on LatestLY on Jul 31, 2020 07:09 PM IST. For more news and updates on politics, world, sports, entertainment and lifestyle, log on to our website latestly.com).