Jammu and Kashmir Police has busted a recruitment module of proscribed terror outfit Lashkar-e-Taiba in Bandipora district, arresting four terrorist associates, besides detaining two youth who were about to join terrorist ranks, officials said on Thursday. 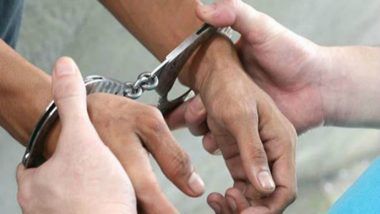 "During investigation, it was revealed that the accused maintained a close contact with terrorist handlers across the border and would do their bidding in recruiting young boys in terrorist ranks and arranging weapons and other logistics for them," a police officer said. Pakistan Based ISI Terror Module Busted by Delhi Police, Six Arrested; Major Cities Were on Target Amid Festive Season.

Parray was earlier associated with Jamaat-e-Islami before shifting his allegiance to the Masarat Alam-led Muslim League. The accused has about dozens of PSAs and FIRs lodged against him and spent a good part of previous decade in custody. Police said in the current instance, Parray was actively abetted in running the module by his nephew Naseer Ahmed Parray, resident of Hajin, Haseena, resident of Sheeri, Khurshid Ahmad, resident of Naidkhai and others.

"The group was in continuous contact across the border and would receive detailed instructions for their day to day activities. Apart from recruiting individuals and arranging arms and ammunition for them, the group was also involved in motivating youth to carry out petrol bomb attacks on government buildings and protected persons and carrying out reccee of potential targets," police said. Punjab Orders High Alert Following Arrest of Members of ISI-backed Terrorist Module.

A huge quantity of incendiary materials which were to be used for making petrol bombs was also recovered from them. "On the disclosures made by the accused, two individuals, identified as Rafeeq Ahmad, resident of Naidkhai and Hilal Ahmed Shah, resident of Shah Mohalla Hajin, who were about to join terrorist ranks at the instance of this group have been detained and are being questioned," police said. A case has been registered and further investigation is in progress.

(The above story first appeared on LatestLY on Sep 23, 2021 11:08 PM IST. For more news and updates on politics, world, sports, entertainment and lifestyle, log on to our website latestly.com).