At least 97 people have been arrested in connection with the clashes that broke out between two groups in Rajasthan's Jodhpur on Monday night and continued on Tuesday following which Internet services were suspended while curfew was clamped in 10 police station areas. 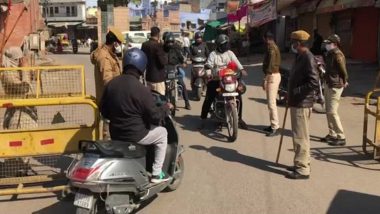 Jaipur, May 3: At least 97 people have been arrested in connection with the clashes that broke out between two groups in Rajasthan's Jodhpur on Monday night and continued on Tuesday following which Internet services were suspended while curfew was clamped in 10 police station areas.

The Divisional Commissioner on Tuesday suspended Internet services in the entire Jodhpur district (including Jodhpur Commissionerate) with an aim to maintain peace and cordial atmosphere and curb rumours.

The violence began after some people were raising flags at the Jalori Gate intersection around 11.30 p.m. on Monday. A person making a video of this was beaten up by some youth. When some people came to his rescue, they beat them also. After this, the other group started throwing stones. Deputy Commissioner of Police East and Udaymandir SHO were injured in the stone pelting.

The violence erupted again on Tuesday morning at the Jalori Gate over the unfurling of a flag. The police cane-charged the miscreants, fired tear gas shells and dispersed the mob.

Meanwhile, the Police Commissionerate has issued a partially amended order which says that students appearing in various school examinations, competitive examinations, teachers and staff engaged in examination work will be allowed to move during the curfew.

If necessary in special circumstances, the concerned Assistant Commissioner of Police would be able to grant permission to go out in the curfew.

Rest of the orders will remain the same.

ADG Law and Order Hawa Singh Ghumaria told that strict adherence to curfew in Jodhpur is being maintained.

Around 1,000 police personnel have been deployed in the district and every incident -- small or big -- is being closely monitored, he added.

Meanwhile, Rajasthan Chief Minister Ashok Gehlot directed the police and the administration to identify the anti-social elements responsible for the incidents that disturb communal harmony and brotherhood, and take stern action against them. He termed the incident in Jodhpur unfortunate.

Addressing a high-level meeting at the Chief Minister's Office on Tuesday, he said that a criminal, irrespective of religion, caste or class, must not be spared if found to be involved in criminal activities and appealed to the general public to maintain peace.

(The above story first appeared on LatestLY on May 04, 2022 08:25 AM IST. For more news and updates on politics, world, sports, entertainment and lifestyle, log on to our website latestly.com).