"Even before the trial is over, society starts believing the outcome of judicial proceedings. Regulation of social media, especially in the context of sensitive trials which are sub-judice, must be considered by Parliament by introducing regulatory provisions," Justice Pardiwala said. 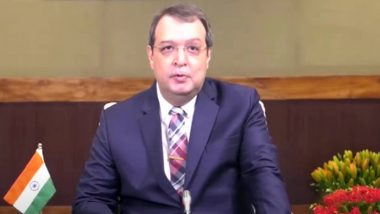 Mumbai, July 3: Supreme Court Judge Justice JB Pardiwala on Sunday expressed concerns about personal attacks on judges and said that it can lead to a "dangerous scenario". Pardiwala also called for strict regulations of social media, thereby claiming that media trials are not healthy for rule of law.

It must be noted that Justice Pardiwala was part of the Supreme Court bench that took slammed former BJP spokesperson Nupur Sharma for her remark on Prophet Muhammad. Justice JB Pardiwala said that social media is overrun by people "possessing half truth and information" and those who don't understand rule of law, evidence, judicial process, and limitations. Rahul Narwekar Elected Maharashtra Assembly Speaker; Here's All About the Colaba BJP MLA Who Is India's Youngest To Hold the August Constitutional Post.

His remarks came while speaking at a virtual meet on Sunday. In strong words, Justice Pardiwala also stated that personal attacks on judges will not be tolerated.

Personal attacks on judges for their judgements lead to a dangerous scenario where judges have to think about what the media thinks instead of what the law really thinks: Supreme Court judge Justice JB Pardiwala who heard Nupur Sharma's plea https://t.co/zdqgTxhcxa pic.twitter.com/W9f1z2Ngdu

"A trial is supposed to be carried out by the courts. Trials by digital media are undue interference for the judiciary. This crosses the Laxman Rekha and is all the more problematic when only half truth is pursued. Constitutional courts have always graciously accepted informed dissent and constructive criticism," he said, reports India Today.

He further added, "Social and digital media is primarily resorted to expressing personalised opinions more against the judges, rather than a constructive critical appraisal of their judgments. This is what is harming the judicial institution and lowering its dignity."

The Supreme Court judge also called for regulation of digital and social media throughout the country in order to preserve the rule of law under the constitution. He also said that 'immense power' of social media platforms is used to precipitate perception of guilt or innocence even before a trial is complete.

"Even before the trial is over, society starts believing the outcome of judicial proceedings. Regulation of social media, especially in the context of sensitive trials which are sub-judice, must be considered by Parliament by introducing regulatory provisions," he added. Uterus Mailed to US Supreme Court in Protest Against Roe vs Wade Ruling? Here's a Fact Check of the Fake News Going Viral.

Justice Pardiwala's remarks came while he was addressing the 2nd Justice HR Khanna Memorial National Symposium, which was hosted by RMNLU & NLUO with the CAN Foundation. Besides talking about regulating social media and personal attacks on judges, Justice Pardiwala also spoke about landmark verdicts delivered by the Supreme Court on issues such as Sabrimala, LGBTQ rights among others.

(The above story first appeared on LatestLY on Jul 03, 2022 07:04 PM IST. For more news and updates on politics, world, sports, entertainment and lifestyle, log on to our website latestly.com).