Rahul Narwekar Elected Maharashtra Assembly Speaker; Here's All About the Colaba BJP MLA Who Is India's Youngest To Hold the August Constitutional Post

Narwekar was elected to the Assembly from Mumbai's Colaba constituency. Before joining BJP, the 45-year-old politician was associated with the Shiv Sena and the Nationalist Congress Party. 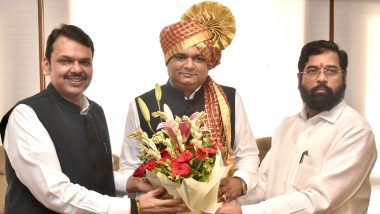 After the State Assembly Speaker was elected, deputy CM Devendra Fadnavis said that Narwekar is the youngest Speaker of the Assembly, not only in Maharashtra but across the country. "He is the son-in-law of the Legislative Council Chairman who is from NCP, Ramraje Naik Nimbalkar," Fadnavis said.

Mumbai lawyer and first-time legislator, #RahulNarwekar (@rahulnarwekar), 45, has been elected as the youngest Speaker of #Maharashtra Legislative Assembly and also becomes the youngest ever in India to hold this august Constitutional post. pic.twitter.com/7EGTWsN1Vi

It must be noted that Narwekar is the son-in-law of Nimbalkar, who is the Legislative Council chairman. With Narwekar's appointment as State Assembly Speaker, Maharashtra has become the only state in the country where the presiding officers of the legislature are in-laws.

Here is everything you need to know about Maharashtra assembly speaker:

Narwekar was elected to the Assembly from Mumbai's Colaba constituency. Before joining BJP, the 45-year-old politician was associated with the Shiv Sena and the Nationalist Congress Party.

Rahul Narwekar is the son-in-law of senior NCP leader Ramraje Naik-Nimbalkar, who is also chairman of the Maharashtra legislative council.

Before 2014, Narwekar was the spokesperson of the Youth Wing of Shiv Sena. in 2014, he quit Sena and joined Sharad Pawar's Nationalist Congress Party.

In the 2014 Lok Sabha Elections, Rahul Narwekar contested as an NCP candidate from the Maval constituency. However, he lost to Shiv Sena's Shrirang Appa Barne. BJP’s Rahul Narwekar Elected As Speaker of Maharashtra Legislative Assembly.

A few years later in 2019, Narwekar joined the BJP. He contested the Maharashtra Assembly Elections on a BJP ticket and won the Colaba constituency by defeating Congress leader Bhai Jagtap.

(The above story first appeared on LatestLY on Jul 03, 2022 05:44 PM IST. For more news and updates on politics, world, sports, entertainment and lifestyle, log on to our website latestly.com).