Kashmiri, Dogri, Hindi, English to be Official Languages of Jammu and Kashmir Apart From Urdu, Centre to Table Bill in Parliament

The Centre will introduce a bill for the inclusion of Kashmiri, Dogri, Hindi and English as official languages of Jammu and Kashmir, apart from Urdu. 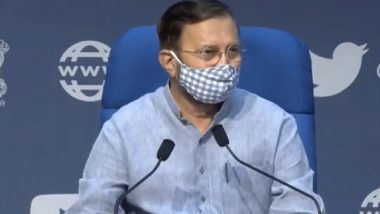 "This has been done based on public demand," Union Minister Prakash Javadekar told a press conference after the cabinet meeting chaired by Prime Minister Narendra Modi. While the official language of Jammu and Kashmir is Urdu, Kashmiri is recognised as a regional language in the state and is also among the 22 scheduled languages of India. Mission Karmayogi, National Programme For Civil Services Capacity Building, Approved by Union Cabinet.

Union Cabinet has approved the introduction of #JammuAndKashmir Official Languages Bill 2020 in which 5 languages Urdu, Kashmiri, Dogri, Hindi & English will be official languages. This has been done based on public demand: Union Minister @PrakashJavdekar pic.twitter.com/XG1WcZWMtG

Javadekar added he will not go into the rationale behind the move, saying the government will explain when the legislation will be introduced in Parliament. Before the Centre withdrew Jammu and Kashmir's special status, granted under Article 370, the J&K Constitution had English and Urdu as official languages.

Besides, Section 47 of the J&K Reorganisation Act empowers the legislative assembly to adopt any one or more of the languages in use in the union territory or Hindi as official languages. The Union Minister further said that the Union Cabinet has also approved Mission Karmayogi for bringing post-recruitment reforms in the government.

(The above story first appeared on LatestLY on Sep 02, 2020 03:49 PM IST. For more news and updates on politics, world, sports, entertainment and lifestyle, log on to our website latestly.com).