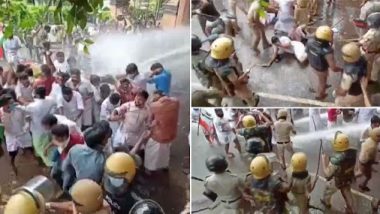 Kochi, September 18: The Kerala Police on Friday used water cannon and resorted to lathicharge against Youth Congress workers in Malappuram. According to a tweet by ANI, the Youth Congress workers were protesting  demanding the resignation of Kerala's Higher Education Minister KT Jaleel over his alleged involvement in gold smuggling case. Jaleel is the Minister for Higher Education, Welfare of Minorities, Wakf and Hajj in the LDF-led government in Kerala. Kerala Gold Smuggling Case: KT Jaleel Hasn't Given 'Satisfactory' Statement During Interrogation, Says ED.

#WATCH Malappuram: Police use water cannon and lathicharge against Youth Congress workers who were holding a protest demanding the resignation of #Kerala's Higher Education Minister KT Jaleel over his alleged involvement in gold smuggling case. pic.twitter.com/PKJ7Z4CRYZ

Jaleel has been named allegedly violating protocols while accepting religious books and flood-relief kits from the United Arab Emirates (UAE) Consulate in Kerala. He had appeared before the National Investigation Agency (NIA) in Kochi on Thursday, which is probing the recent gold smuggling case. He was  questioned for over eight hours in connection with the gold smuggling case. This prompted the opposition to intensify protests demanding his resignation, but Chief Minister Pinarayi Vijayan rejected it.

Jaleel appeared before the NIA a week after he was questioned by the Enforcement Directorate (ED) in connection with the alleged violation of the Foreign Contribution Regulation Act (FCRA) in accepting consignments of Holy Quran brought from UAE through diplomatic channels.

(The above story first appeared on LatestLY on Sep 18, 2020 02:22 PM IST. For more news and updates on politics, world, sports, entertainment and lifestyle, log on to our website latestly.com).