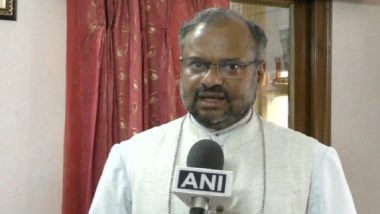 Thiruvananthapuram, July 13: A local court in Kerala on Monday cancelledthe bail of Bishop Franco Mulakkal. The court also issued a non-bailable warrant against Mulakkal. The bail was cancelled by the Kottayam Additional District Court. The order was passed by Judge G Gopakumar after Mulakkal repeatedly failed to appear before the court. The bail was granted to Mulakkal last year. He was accused of raping a nun in Kerala.

Last week, the Kerala High Court dismissed a petition filed by Mulakkal seeking directions to discharge him without a trial from the rape case filed against him by a senior nun. In his discharge petition, Mulakkal claimed that there was a lack of evidence to prove him a culprit.

According to the plea filed by the accused, there were contradictions in the recorded statements of the witnesses and therefore no proof was worth being upheld to proceed with the case. However, the prosecution argued that Franco was deliberately trying to delay the trial in the case.

Mulakkal was arrested on September 21, 2018 on rape charges, The Kerala Police has filed a 1,400-page charge sheet against him. The charge sheet names 83 witnesses, including Cardinal of the Syro-Malabar Catholic Church Mar George Alencherry, three bishops, 11 priests and many nuns. After the case came to light, Mulakkal was removed as head of the Jalandhar diocese.

(The above story first appeared on LatestLY on Jul 13, 2020 05:04 PM IST. For more news and updates on politics, world, sports, entertainment and lifestyle, log on to our website latestly.com).