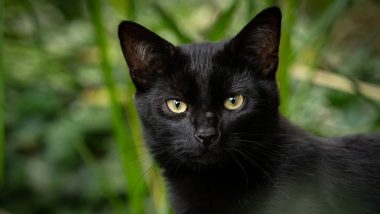 "A mad cat did attack people indiscriminately in Dalaipeta village and seven people required treatment in a nearby hospital whereas one person was admitted in Chinameringi CHC," confirmed a police official to IANS on Monday. Madhya Pradesh: Cat Attacks Two Newborns at Government Hospital in Jabalpur; 'Both Children are Fine,' Says Hospital Superintendent.

The cat went on a biting spree around midnight in the intervening night of Saturday and Sunday. "Right now all of the injured people are safe and there is no information about where the cat vanished," he said.

According to the police official, the cat could have bitten the people out of fear or after consuming some intoxicating fruit in the forest. The official said they will increase surveillance and inform the forest department in the event of another attack.

(The above story first appeared on LatestLY on Jul 05, 2021 06:25 PM IST. For more news and updates on politics, world, sports, entertainment and lifestyle, log on to our website latestly.com).