‘Saraswathi Rajamani - The Forgotten Spy’ is about the forgotten freedom fighters. Saraswathi belonged to Tamil Nadu and her father was a rich businessman who had settled in Burma. The father of the Nation Mahatma Gandhiji and Netaji Subhash Chandra Bose visited her home in Rangoon. 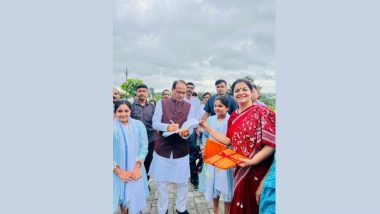 The book is the latest in an impressive list of achievements notched by the twins who are Grade 5 students of the Sanskaar Valley School of Bhopal, Madhya Pradesh. Speaking on the occasion, Hon’ble CM Shri Shivraj Singh Chouhan appreciated and blessed the twins- Shivaranjani and Devyani Bharadwaj and launch their second book ‘Saraswathi Rajamani - The Forgotten Spy’ that commemorates Azadi ka Amrit Mahotsav. The book is a tribute to all such unknown freedom fighters. Their debut book, ‘Sun Salutations’ was appreciated by our Hon’ble Prime Minister Shri Narendra Modiji in 2021.”

Speaking on the occasion of the book launch Ms. Smita Bharadwaj, (IAS), Principal Secretary, GoMP said, “I am really proud of my daughters who have become illustrators and authors since a tender age of 8. The idea was to tell the story of ‘Saraswathi Rajamani’- so that children as well as adults know about all such unknown freedom fighters. This is the way we show our gratitude to them. To cater to national and international markets and readers, the book has been published in English and Hindi and will be available on Amazon.” The girls were inspired and guided by their mother, Smita Bharadwaj. MP CM Shivraj Singh Chouhan Holds a Meeting with Officials in Bhopal.

‘Saraswathi Rajamani - The Forgotten Spy’ is about the forgotten freedom fighters. Saraswathi belonged to Tamil Nadu and her father was a rich businessman who had settled in Burma. The father of the Nation Mahatma Gandhiji and Netaji Subhash Chandra Bose visited her home in Rangoon.

At a tender age of 16 years, she was the youngest spy of India who disguised as an errand boy and spied in the British camp. During World War II, she sent classified information from the British camp to Netaji Bose who in turn gave the information to the Japanese army. Saraswathi joined the Indian National Army (INA) of Netaji in 1943 in Rangoon.

Once her friend Durga was caught and was imprisoned by the British. Instead of running away alone, Saraswathi disguised herself as a local sweeper girl, broke open the lock and helped Durga escape. While running away the British shot at Saraswathi and she was hurt in her leg. Both the girls hid on the top of a huge tree for three days without food and water. Later on, they escaped by a bus and reached Rangoon after travelling 700 kilometers. Yet we did not recognize her bravery and patriotism.

In 1957, ‘Saraswathi Rajamani’ came back to India and settled in Chennai. On her arrival to India, the customs officials took away all her belongings, including the appreciation letter of Bose and the medal given by the Japanese Emperor. She lived in poverty. Only when the media highlighted her situation, the then CM of Tamil Jayalalitha gave her a one-bedroom apartment and Rs 5 lakhs in 2003.

During the Tsunami, Saraswathi Rajamani donated all that money to the homeless. She died in 2018 in Chennai as an unsung hero of the national movement. The book is a tribute to all such unknown freedom fighters. We must show our gratitude for their sacrifices.

ABOUT AUTHORS SHIVARANJANI AND DEVYANI:

Devyani and Shivaranjani Bharadwaj are 10 years old twins from Madhya Pradesh, India. This is their second book. The first book ‘Sun Salutations’ was published when they were eight years old. Both books are written and illustrated by them. CM Shivraj Singh Chouhan Invites Investors As Madhya Pradesh Signs MoU for First Phase of Omkareshwar Floating Solar Project.

Shivaranjani and Devyani Bharadwaj have won many International, National and State level competitions. They both won first and second prize at district, state and national level in ‘Spell bee’. With their vocabulary and their reading skills, they both have represented India at International level at the age of 8 years.

They also won many prizes, 6 trophies in various competitions, Olympiads, quiz competitions, painting competitions and won about 30 certificates of excellence between them. Both the girls have been studying Sanskrit and classical music for 3 years. Devyani also got a special prize in a Sanskrit competition organized by Bhandarkar Oriental Research Institute, Pune.