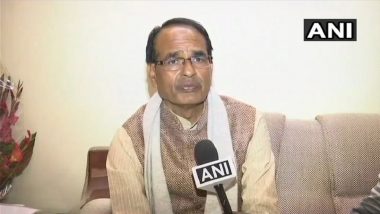 Bhopal, July 11: Nine days after they were inducted into the Madhya Pradesh cabinet, 28 ministers will finally get portfolios on July 12. The delay in assigning ministries had triggered speculations about an internecine conflict in the ruling BJP over accommodating loyalists of Jyotiraditya Scindia, whose exit from the Congress along with 22 MLAs led to collapse of Kamal Nath-led government in March this year, in the cabinet.

"I will do it tomorrow (Sunday)," Chouhan told reporters in Gwalior when asked about the delay in allocating portfolios. After expanding his cabinet for the second time on July 2, Chouhan met top brass of the BJP in New Delhi apparently to discuss the portfolio allocation, which has become a political tightrope in the presence of assertive Scindia. Kamal Nath Preps For MP Bypolls, Trains Guns at Jyotiraditya Scindia, Shivraj Singh Chouhan With 'Tiger, Mama' Jibes.

The 28 ministers comprise at least a dozen loyalists of Scindia. Their induction in the cabinet reportedly caused heartburn in ministerial aspirants in the state BJP.

The initial 'mini' expansion of the Chouhan cabinet took place on April 21 with the induction of five ministers, including two former Congress MLAs, over a month after Chouhan took oath as the CM for the record fourth term.

Meanwhile, taking potshots at the BJP, Congress veteran Digvijay Singh tweeted: "8 days of cabinet expansion completed in Madhya Pradesh. CM's workout on allocation of departments doesn't seem to be over.

"Has Tiger become a toothless? Let us see who runs away from his territory!".

Speaking after the cabinet expansion on Thursday, Scindia had said he wanted to tell Congress leaders that "Tiger abhi zinda hai."