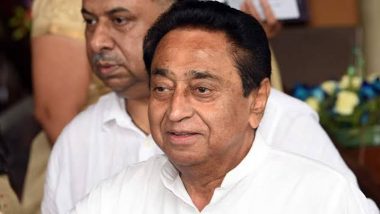 Dhar, July 7: Former Madhya Pradesh chief minister and Congress leader Kamal Nath on Tuesday launched his election campaign for bypolls on 24 assembly seats in the state. During an election rally in Badnawar, Kamal Nath lashed out at  Bharatiya Janata Party (BJP) leaders including Jyotiraditya Scindia and CM Shivraj Singh Chouhan. Taking a dig at Scindia, for his “Tiger Zinda hai comments”, Kamal Nath said that people of Madhya Pradesh would decide who is a tiger and who is not.

While addressing party workers in Badnawar area of MP’s Dhar district, the former CM stated, “I am not a 'maharaja'. I am not a tiger. I am not 'mama'. I never sold tea. I am Kamal Nath. Who is a tiger & who is not. The people of Madhya Pradesh will decide who is a cat and who is a rat.” Notably, Chouhan is popularly known as “Mama” (maternal uncle) by people of the state. 'Tiger Abhi Zinda Hai', Jyotiraditya Scindia Tells Digvijaya Singh, Kamal Nath.

I am not a 'maharaja'. I am not a tiger. I am not 'mama'. I never sold tea. I am Kamal Nath. Who is a tiger & who is not. The people of Madhya Pradesh will decide who is a cat & who is a rat: Former MP CM & Congress leader Kamal Nath addresses party worker in Badnawar, Dhar dist pic.twitter.com/ZeXVIJNxAg

Earlier in the day, Nath began his campaign for the mini-midterm elections involving 24 assembly seats in the state from Ujjain. He arrived in the district for 'Darshan' of Mahakal before starting his poll campaign. His Ujjain visit was due on July 3 but was washed out due to heavy rains. Shortly after the 'pooja' and meeting with the party colleagues, Kamal Nath left for Badnawar to address the first rally -- 'Loktantra Bachao' (save democracy) rally.

Last week, Scindia attended the second expansion ceremony of the Shivraj Singh Chauhan Cabinet. He launched a scathing attack on former Congress Chief Minister Kamal Nath and senior leader Digvijaya Singh. He said that for the last two months some people are trying to tarnish his image, "but I want to tell them that tiger is still alive." Scindia, who joined BJP on March 12, also expressed the hope that the 12 ministers chosen in the Cabinet today will win bypolls.

(The above story first appeared on LatestLY on Jul 07, 2020 07:22 PM IST. For more news and updates on politics, world, sports, entertainment and lifestyle, log on to our website latestly.com).