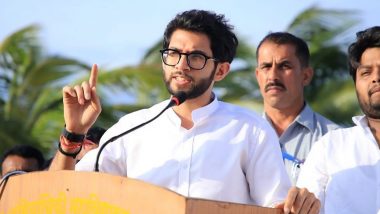 Mumbai, October 18: Throwing his weight behind environmentalists protesting against the cutting of trees in Aarey Colony, Shiv Sena leader Aditya Thackeray on Friday promised to declare Aarey a forest. "We are with the people, tribals who are protesting against the felling of trees in Aarey Colony. We will declare it a forest if voted to power," he said while speaking to ANI in Mumbai. Maharashtra Assembly Elections 2019: Shiv Sena Promises Rs 10 Meal, Medical Checkup for Only Rs 1 for Farmers in Manifesto.

The statement from Thackeray came just days after 29 people were arrested for protesting against the cutting down of trees in Aarey area following the orders of the Mumbai High Court.

The protestors were opposing the cutting of trees for the construction of the car shed of the Metro III project, and were demanding its relocation. The protestors were later granted bail by a local court. When asked to comment on the statement made by Union Home Minister Amit Shah that the next chief minister will be from the BJP, Thackeray said, "If a senior leader is saying something like this, what can I say? BJP-Shiv Sena are fighting together and Devendra Fadnavis is leading the campaign.

"Recently, the Home Minister had reportedly stated that the BJP in Maharashtra was open to the idea of offering the post of deputy chief minister to its ally and added that Devendra Fadnavis would continue as chief minister if the NDA came to power in the state.

Thackeray, who is contesting the assembly elections from Worli, also commented on the Ayodhya dispute and asserted that his grandfather Bal Thackeray's dream of constructing a Ram temple in the city will come true. Maharashtra Assembly Elections 2019: Sharad Pawar Takes Jibe on Shiv Sena's Rs 10 Meal Promise, Asks 'You Will Run Government or Cook?'

"Ram temple which was the dream of my grandfather and infinite people will come true. "The voting for the 288-member Assembly in Maharashtra will be held on October 21 in a single phase. The counting of votes will take place on October 24.