The Man vs Wild episode featuring Prime Minister Narendra Modi created huge anticipation as audiences in India and the Indians living abroad were curious to see PM Modi in a new set-up, away from the rough and tough of Indian politics and into the wild at the Jim Corbett National Park. The episode was watched by billions and commented widely upon on Twitter. 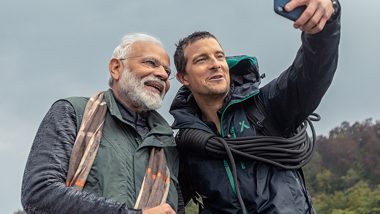 Mumbai, August 20: It's official! The popular TV show Man vs Wild episode featuring India's Prime Minister Narendra Modi, which was telecast on August 12, has become the "world's most trending televised event", tweeted the host of the show, Bear Grylls. The show's host Grylls, who exhibits survival techiniques at world's most "wild" and difficult places, hosted PM Narendra Modi in an episode that showed a side of the Indian Prime Minister which many were unaware of. The show was shot at India's famous Jim Corbett National Park. Man vs Wild With Bear Grylls And Prime Minister Modi Review: Indian PM Appears in a Never Seen Before Avatar in An Exciting Walk Through Tiger's Territory at Jim Corbett.

"Officially the world’s most trending televised event! With 3.6 BILLION impressions!’ 💥💥 (Beating ‘Super Bowl 53 which had 3.4 billion social impressions.) THANK YOU everyone who tuned in," tweeted Grylls.

‘Officially the world’s most trending televised event! With 3.6 BILLION impressions!’ 💥💥 (Beating ‘Super Bowl 53 which had 3.4 billion social impressions.) THANK YOU everyone who tuned in! 🙏🏻 #PMModionDiscovery #ManVsWild #india https://t.co/OvfRD9EIcq pic.twitter.com/1E0HwiI6ME

Prime Minister Narendra Modi himself on Monday, August 12 had urged his followers on Twitter to watch the episode of the much-awaited special episode — Man vs Wild — featuring him with its host Bear Grylls tonight at 9 pm on Discovery Channel. Man vs Wild With Narendra Modi: 10 Interesting Things You Didn't Know About Bear Grylls, the Host of the Discovery Channel Show.

"What better than the lush green jungles of India, in the midst of Mother Nature to throw light on environmental conservation and climate change..Do join at 9 PM tonight!,” the Prime Minister said while retweeting Bear Grylls’s post.

Home Minister Amit Shah had also tweeted and said that, “Prime Minister @narendramodi Ji’s commitment towards the environment and its conservation is well known to the world. Watch him talk about Incredible India and highlight our cultural commitment to preserving the environment, tonight at 9 pm with @BearGrylls on @DiscoveryIN.”

The show began with Grylls asking Modi about his childhood and the Indian PM talking about his love for "mother nature". Modi also recalled his growing up years and the struggles of his life when he was young. The picturesque Jim Corbett National Park provided the perfect setting for the episode as well, said Twitterati.

(The above story first appeared on LatestLY on Aug 20, 2019 08:49 PM IST. For more news and updates on politics, world, sports, entertainment and lifestyle, log on to our website latestly.com).